Heading the ball may lead to an increased risk of dementia 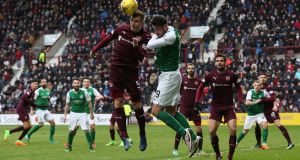 Soccer players may be at increased risk of developing a form of dementia that is triggered by repeated blows to the head.

The brain damage seen with the condition is similar to that in boxers and in US football players.

This is the first time that the condition, Chronic Traumatic Encephalopathy (CTE), was shown to exist in retired footballers, say a research team from University College London.

If a link between heading a football and CTE can be established it will mean a significant lowering of the bar for what constitutes health risk in contact sports.

The finding may mean that young players will require a new approach to coaching on how to head a ball safely, according to support group Acquired Brain Injury Ireland.

The research findings arise out of a study of 14 footballers, 13 former professionals and one committed amateur who played for 23 seasons.

The retired footballers had dementia and were referred to a psychiatry service in Swansea, Wales between 1980 and 2010.

Next of kin gave permission to perform postmortem examinations on six of these individuals.

The results showed that four of the six had signs of both CTE and Alzheimer’s disease.

“This is the first time CTE has been confirmed in a group of retired footballers,” said Dr Helen Ling of UCL’s Institute of Neurology.

She is lead author in a paper published on Wednesday in the journal Acta Neuropathologica.

The findings suggest a potential link between playing football and the development of degenerative brain disease in later life, she said.

She warned, however, that there were unanswered questions because of the small sample size – six individuals – and there is no information about how common dementia might be amongst soccer players.

The initial group of 14 players were interviewed to measure their involvement in soccer.

Only six reported concussion with loss of consciousness while playing football over an average of 26 years.

Twelve of the 14 eventually died of advanced dementia.

“We do not yet know exactly what causes CTE in footballers or how significant the risk is,” said co-lead author Prof Huw Morris of the UCL Institute of Neurology.

The average footballer heads the ball thousands of times during a career but this does not cause noticeable symptoms, he said.

More research was “now urgently needed” to measure the risks and introduce any protective measures to avoid long-term damage.

“Players may need education about how to head the ball, and we also need to teach coaches what concussion is,” she said.

A player may not pass out but may throw up after a match or can’t remember the later stages of a match, both possible signs of concussion, she said.

“If people are managed, CTE is not a problem. It can be years on when a problem is seen.”

The GAA, IRFU and FAI all apply concussion protocols to reduce risks to players during a match.

Research, education and information initiatives ensured that “awareness of concussion has never been higher in our sport”, said Stephen McNamara of the IRFU.

The message was simple. If there was a suspicion of concussion the player must be removed from play, he said.