Travellers as ‘genetically different’ from settled Irish as Spanish 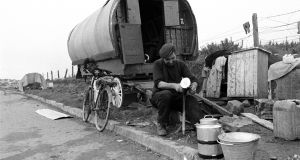 The emergence of Irish Travellers as a distinct group occurred long before the Great Famine, a genetic analysis shows.

The study also indicates that while Travellers originally descended from the general Irish population, they are now very distinct from it.

DNA analysis allowed the researchers to track when and how quickly Travellers arose. This occurred between eight and 14 generations ago, with the best fit suggesting 12 generations or 360 years ago, said Prof Gianpiero Cavalleri, who conducted the study with colleagues at the Royal College of Surgeons in Ireland and the University of Edinburgh.

The 12 generations would push the emergence of Travellers back to 1657. This significantly predates the Great Famine of 1845-52, an event long thought to have caused the formation of a migratory community that became the Travellers.

The research suggests that Traveller origins may in fact date as far back as 420 years to 1597. The Plantation of Ulster began around that time, with native Irish displaced from the land, perhaps to form a nomadic population.

The findings provide strong evidence that Travellers should receive some form of ethnic status, according to Prof Cavalleri.

“We think this is a nice piece of evidence for that complex debate,” he said. The research group “would be supportive of some form of ethnic status”.

“Travellers cluster with the Irish but they are very definitely distinct from the Irish. There is a considerable genetic distance between them.”

The far-reaching study sought to understand the genetic connections between Travellers, the settled Irish and people further afield. It involved looking at the DNA of more than 11,000 people including Travellers, Roma Gypsies, settled Irish, British, Continental Europeans and individuals from the rest of the world.

It also sought to set a time for when the Traveller community began to form as a distinct and separate population.

Today there are between 29,000 and 40,000 Travellers in Ireland, representing 0.6 per cent of the total population.

The researchers did not try to connect the emergence of Travellers with any one historical event. “We tried to avoid speculating. You could point to Cromwellian times but it is speculation,” Prof Gianpiero said.

They did not however have to speculate about the genetics including an important analysis of the interrelatedness of Travellers, something the researchers say could have implications for disease mapping within Ireland.

It is common practice for Travellers to marry first and second cousins, leading to a situation where they have some of the highest rates of duplicated DNA in the world.

“The isolation and consanguinity (marrying cousins) have in turn led to an increased prevalence of recessive diseases, ” the authors said.

They published their findings on Thursday in the Nature journal Scientific Reports, with the RCSI’s Edmund Gilbert as lead author.

The DNA analysis also revealed that there are four “genetic clusters” or subdivisions within the Traveller community. These in turn tend to match up with their social grouping and use of language.

One cluster is associated with the “Rathkeale group” of Travellers. Two other clusters are linked to whether the Traveller speaks the Cant or Gammon dialects of the Traveller language Shelta.

The study clearly showed there was no significant genetic contribution made by Roma Gypsies to Traveller DNA. This disproves a view held by some that the two groups were genetically related.

Traveller origins have long been a “source of considerable debate” the authors write. There is also a lack of documentary evidence that reveals the history of the Irish Traveller population.