How the Spire sways with the wind but stays upright

The O’Connell Street landmark is a powerful symbiosis of art, architecture and engineering 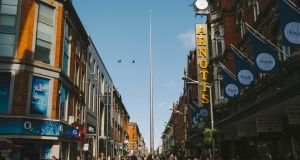 The Spire is simple in external form, but it involved advanced technology and fine craftsmanship to manufacture. Photograph: iStock

Towering over Dublin’s O’Connell Street, the Spire - or more grandly, the Spire of Light -  at 120m, is about three times the height of  Nelson's Pillar, which once stood on the site.  The Spire was erected in 2003, filling the void left by the destruction in 1966 of Nelson’s Pillar.

The needle-like structure is a slender cone of stainless steel, the diameter tapering from 3m at the base to 15cm at its apex. The illumination from the top section shines like a beacon throughout the city.

The Spire is audacious in conception and abstract in design, fulfilling neither a practical function nor a commemorative purpose. Rather, it points upward and (figuratively) to the future, symbolising hope and optimism.

It has a definite elegance and abstract appeal, but has generated controversy, attracting the usual clutch of facetious nicknames.

The structure is simple in external form, but it involved advanced technology and fine craftsmanship to manufacture. Extensive mathematical modelling and simulation were required during its design.

The Spire was fabricated from eight sections up to 20m in length, each having the form of a frustum or truncated cone. They are bolted together to make a smooth, streamlined structure.

The Spire is in the form of a cantilever, anchored at only one end, like the wing of an aircraft. The wind load on the structure is transferred to the bottom, where it must be balanced by a corresponding turning effect, or moment.

A ring of large bolts holds the structure in place on a reinforced concrete base. In exceptionally strong winds, the apex of the Spire sways by more than a metre.

Almost all structures vibrate. Wind-induced oscillations, if not controlled, can be destructive to the point of causing collapse. Mechanical structures have natural time-scales at which oscillations called normal modes are easily induced, and each mode has a characteristic period of oscillation.

When the wind force varies with a period that matches a normal mode, the amplitude of the oscillations can grow to destructively large levels.

Steady winds can also cause destructive vibrations. Although the Spire is circularly symmetric, the flow of air around it is not. An obstacle in an air-stream generates eddies that shed alternately from one side and the other.

The downstream pattern of eddies is called a Karman vortex street and it induces fluctuating sideways forces on the obstacle. Since wind speeds generally increase markedly with height, the force near the top can be substantial.

Theoretical analysis showed the Spire oscillates at a fundamental period of 3.65 seconds. The second mode has a period of about 1.2 seconds. To suppress these oscillations, two tuned mass dampers have been installed in the Spire.

These are large masses, each weighing about a tonne, suspended by cables within the hollow structure, like giant pendulums with periods close to the first two resonant modes. The masses are connected to the interior wall of the Spire by viscous dampers that dissipate the energy of oscillations, like shock-absorbers in a car.

The Spire, a valuable marker defining the centre-point of the city, is a popular meeting place, but it has not yet attained iconic status. Public attitudes appear to be softening, and Dubliners may yet come to love this powerful symbiosis of art, architecture and engineering.