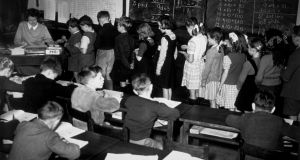 1948: A classroom scene during a maths lesson. (Photo by Topical Press Agency/Getty Images)

Science is very good at spinning off new technologies that make life easier and make us more efficient. However, such technologies often have unforeseen negative consequences. Two such examples are electronic calculators and predictive text.

I recently brought three items to the supermarket checkout which was manned by a third-level student who works there part-time. As he keyed in my items, the till went dead. He tried an adjacent till but all terminals were dead. The problem now was how to add up my three items, a job the working terminal does automatically. I suggested he just tot the items up on a piece of paper. He didn’t bite at this. I offered to add up for him. No, that wouldn’t do either. He was clearly unable to add the three items in his head or on paper and began to get flustered. Then he smiled broadly, pulled a smartphone from his pocket, selected calculator mode and added up my three items.

Many people, except those responsible for dictating teaching methods, now see a big problem with the way maths is taught in primary school. New “child-centred” methods have replaced the traditional teaching method where the teacher drilled the class through the topic of the day, trying hard to ensure everybody understood the lesson. A certain amount of rote learning was a cornerstone of traditional teaching.

All people of a certain age will remember learning off our multiplication tables by heart, permanently engraving them in our long-term memory. It is essential to have such basic facts at your fingertips if you are to progress further in maths. Such rote learning is now de-emphasised in our schools, if not outright frowned upon, and children are instead allowed to use electronic calculators at far too young an age. This produces many students, like my supermarket friend, who cannot perform basic mathematical tasks without a calculator and who cannot progress in maths because they don’t know the essential basic facts.

Predictive text is another ubiquitous aid in the modern world. Predictive text suggests words the user may wish to insert when typing a document based on the first letters typed and the context of all the words in the message. Because the user can simply tap in the word instead of typing it out, letter by letter, predictive texting speeds up the input process.

Predictive texting software is notoriously error-prone and can cause embarrassing mistakes unless carefully monitored. However, since the whole point is speed of execution, careful monitoring is very often neglected. The website damnyouautocorrect.com lists examples of embarrassing messages sent unchecked, eg, an intended message “I hope to visit the Whitehouse” was sent as “I hope to visit the Whorehouse”.

But on a more fundamental level, extensive use of predictive texting can impoverish one’s vocabulary and writing spontaneity and this is particularly serious for children. Predictive texting encourages children to take the quick and lazy route, pay less attention to detail and make more mistakes. It encourages thoughtlessness and impulsive behaviour and is harmful to academic performance. Research published by Michael Abramson and others in the Journal of Bioelectromagnetics has shown that teenagers who send more text messages work faster but score lower on IQ tests than teenagers who send fewer text messages.

The widespread reliance on predictive text in China and Japan has already had severe negative consequences: young people are literally forgetting how to write with pen and paper. The Chinese and Japanese languages have thousands of intricate characters, and traditionally schoolchildren had to memorise them. But now the universal use of computers and mobile phones with predictive text is causing widespread “character amnesia” – people can recognise characters when the predictive text presents alternatives but cannot directly recall the characters from memory when they pick up a pen to write. Writing a character is neurologically different from recognising it.

The UK Office for Standards in Education now strongly recommends that teaching of multiplication tables must be rigorous, and some Chinese universities stipulate that half of students’ assignments must be completed in handwriting. Ireland, please take note.

William Reville is an emeritus professor of biochemistry at UCC, understandingscience.ucc.ie