Eugenics and the outer limits of good breeding

It hasn’t gone away, you know: Victorian junk science has its race-baiting adherents 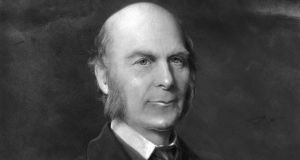 Sir Francis Galton: The Victorian scientist proposed a system of selective breeding of Britons in order to improve the human stock of the nation. Photograph: Hulton Archive/Getty Images

When I teach Irish university students about eugenics as part of the history of science and medicine, I observe gratifying looks of incredulity – often followed by outbursts of horror and disgust.

Eugenics, a science popular in the late 19th and early 20th centuries, aimed to encourage governments to favour the reproduction of the most “fit” members of society and to reduce or even prevent the reproduction of those considered less fit. My students immediately hone in on the injustice of self-selected individuals deciding what constitutes fitness to reproduce. I use the example of eugenics because it shocks them into understanding that science and medicine are not neutral and can be used to forward social agendas.

Eugenics was a specific extension of evolutionary ideas often termed social Darwinism. Eugenics societies flourished around Europe and the US in the early 1900s, but were particularly prominent in Britain, where its promoters included a number of leading evolutionary scientists.

Drawing on both evolutionary science and an understanding of livestock breeding, British scientist Francis Galton proposed a system of selective breeding for humans in order to improve what he saw as the human stock of the nation. Among famous scientific supporters of eugenics were JBS Haldane and Julian Huxley.

The movement was driven partly by a perception that the underclass was tainted with high rates of intemperance, “lunacy” and “feeble-mindedness” while reproducing at a much higher rate than the middle and upper classes. Eugenicists predicted national deterioration as a consequence. Some went so far as to advocate the confinement and sterilisation of those considered unfit to reproduce.

As historians such as Jane Carey have pointed out, eugenics had strong links to the early birth control movement and its leaders in the US and Britain. Compulsory sterilisation of women in institutional care continued into the 1970s in some areas of the US.

Ireland was not exempt from the movement, although its most extreme forms never did take root. Historian Greta Jones has documented the Irish eugenics movement and its support among a diverse group of scientists, doctors and leading members of most branches of Christianity. Members of the British Eugenics Society, for example, included William Butler Yeats and Lady Aberdeen (founder of the Women’s National Health Association).

The Belfast Eugenics Society, founded in 1911, was initially focused on pushing for the British Mental Deficiency Act (1913) to be extended to Ireland. Most of the act was about how the state ought to care for those considered incapable of caring for themselves. Yet British eugenicists celebrated those measures that allowed, in specific circumstances, the government to institutionalise some categories of persons they considered “unfit”.

Irish eugenicists wished to see similar powers extended here, citing the usual concerns about the rapid multiplication of undesirables on the island.

The eugenics movement gained only limited purchase in Ireland, especially after it veered towards ideas of sterilisation and contraception seen as irreconcilable with Catholic doctrine. Yet more subtle forms of eugenics persisted in the Irish Free State and beyond. Public health campaigns around TB, for example, discouraged the tuberculous from marrying. “Bonny baby” competitions reflected an interest in the health of mothers and infants in order to preserve and promote the health of the nation.

We should not think that eugenics or eugenical ideas have disappeared. Indeed, in some ways they have taken more insidious and subtle forms and are now intermingled with ideas about race and xenophobia.

At the extreme end, Richard Lynn, an emeritus professor of psychology at the University of Ulster, describes his research interests as including “eugenics” and “race differences”. This despite the fact that most scientists would argue that there is no scientific category of “race” among which to measure differences. The news reporting of birth rates across the world is often tinged with a shadowy fear that people from the “wrong” part of the world are reproducing themselves much faster than those from the “right” part.

It is easy, from a good historical distance, to see the flaws and bias in the ideas of eugenicists. It is much harder, but still very necessary, to be wary of how science can be used to support the questionable values of our own society.