Can robots create art? Looking at a world in which Humans Need Not Apply

The “Humans Need Not Apply” exhibition, which looks at machine learning, opens this week in Science Gallery Dublin 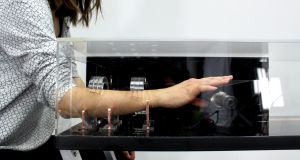 Ad Infinitum: these cuffs parasitically attach electrodes on to humans and stimulate their muscles as to force them to crank. Photograph: Pedro Lopes

What kinds of jobs will machines replace? Can artificial intelligence create art? Do we want robots to help us grieve? And would you let one tickle you?

The new exhibition at Science Gallery Dublin wants us to bend our brains around the future of artificial intelligence, creativity and a whole lot else in Humans Need Not Apply, which kicks off this week.

Humans Need Not Apply is a provocative title, admits Science Gallery director Lynn Scarff, who is also one of the curators of the exhibition.

“We are interested in people having a conversation about the future of machine learning and artificial intelligence being in their lives,” she explains. “So we are exploring how this is moving into the workforce, but rather than only concentrating on what jobs are changing, we are also looking at aspects of creativity and culture.”

The exhibition wants to help people get to grips with language, according to Scarff. “You have terms such as artificial intelligence, robotics, machine learning and cognitive computing, and these can obfuscate,” she says. “We want to invite people to get to grips with these terms, and to think about how the field has grown in recent years.”

Artificial intelligence opens up plenty of opportunities, not least in medical diagnostics, she notes. “The sheer ability to look at huge amounts of data quickly will assist scientific advances,” says Scarff. “But this is not like the industrial rev, we are not just replacing manual labour. There are no big brush strokes, and the types of jobs that are changing are nuanced.”

But just how “human” can machines be? Some of the more speculative exhibits will “play with the idea of artificial intelligence taking on human attributes”, says Scarff.

They include robots that copy your moves and two phones that take photos of each other and post them on social media.

A computer will be doodling and making artistic decisions based on its “mood” and surroundings, humans will play music written by artificial intelligence and visitors can try to figure out whether poems or artworks were created by humans or machines.

Some exhibits are deliberately provocative and seek to push conversations about how we may outsource emotions to machines in the future, or develop more intimate relationships with them.

“One looks at a robot placing stones on a loved one’s grave as a way of remembering them,” says Scarff. “Is that a kind of future that we want to have?”

In another, for the over 18s, a robot will use a soft brush to “tickle” visitors. “Artificial intelligence-based companionship could be critical to people’s health and wellbeing,” says Scarff. “So we are looking at that intimacy in a light-hearted way.”

More sinister is the thought of a parasitic robot living off human energy, she notes: “This is more of a [dystopian] view, with machines getting energy from us, locking you into a system where your movement keeps it going and you can’t be released until someone else takes your place.”

Scarff hopes that visitors will be inspired to think and talk about a more machine-based future and to ask important questions about how that should happen. “We need to be asking our politicians whether we have the right systems set up in education, in health, in transport for the future,” she says.