Action not just words vital to save Brazil’s rainforests 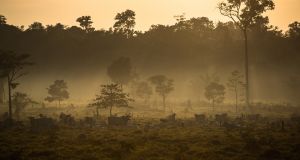 In 2011 alone, the EU imported beef and livestock feed associated with more than 1,000sq km of Brazilian deforestation – equivalent to more than 300 football fields a day

Evidence that Brazil’s rainforests are being pillaged to accommodate human over consumption is becoming more conclusive. What we eat, drink and use on a daily basis very often hails from the world’s last great forests, but demand is leading to rampant deforestation, which is not sustainable and will have cataclysmic outcomes if not addressed, scientists warn.

In an open letter published in Science in late April, Dr Laura Kehoe, an Irish postdoctoral fellow at the University of Oxford, joined with more than 600 scientists across Europe and leaders of 300 indigenous groups to request the EU – Brazil’s second biggest trading partner – strengthen efforts on sustainable trade and uphold its commitments on human rights, environmental protection, and climate change mitigation.

“We want the EU to become a world leader in sustainable trade,” says Dr Kehoe, who studies how meat consumption can drive deforestation. “We protect forests and human rights at home – why do we have different rules for our imports?”

Brazil is home to almost a quarter of the world’s remaining forests that are key to global biodiversity conservation, global climate change mitigation and the resilience of the Earth system as a whole, she adds. One-sixth of the carbon footprint of EU diets is directly linked to tropical deforestation, while 29 to 39 per cent of deforestation emissions are driven by international trade, mainly in beef and oilseeds.

“Consumers probably don’t know that when they buy a burger or any kind of meat, it could be responsible, not only for the deforestation of the Earth’s lungs, but also the displacement of indigenous groups. It’s no secret that by killing the rainforest, we’re essentially killing the planet,” Kehoe says. “And with violence escalating on Brazil’s deforestation frontiers, it’s killing its people too.”

The destruction of the forests is alarming on a multitude of levels. According to the letter, an area the size of Portugal was deforested in Brazil between 1990 and 2008. In 2011 alone, the EU imported beef and livestock feed associated with more than 1,000sq km of Brazilian deforestation – equivalent to more than 300 football fields a day, according to data published by EUBrazilTrade.org

The EU also imported more than €2 billion worth of livestock feed from Brazil in 2017, with no way of knowing whether that feed was grown on deforested land or whether it was associated with indigenous rights conflicts, says Tiago Reis, a fellow at the Earth and Life Institute in Louvain, Belgium.

Cattle grazing creates methane, which has a global warming potential 86 times that of CO2 on a 20-year timeframe. Deforestation, the second largest source of anthropogenic greenhouse gas (GHG) emissions, is largely driven by expanding forestry and agriculture, Kehoe points out. When trees are felled, they release the carbon they are storing into the atmosphere, where it mingles with GHGs from other sources and contributes to global warming.

According to the World Carfree Network, logging adds more CO2 to the atmosphere than the sum total of cars and trucks on the world’s roads, which account for about 14 per cent of global carbon emissions. In 2016, deforestation in Brazil alone emitted more than 1 billion tons of CO2, almost 50 per cent of total gross Brazilian CO2 equivalent emissions in that year, Reis points out.

But food is not the only problem, Kehoe stresses. In 2017, the EU spent more than €3 billion on Brazilian iron imports, despite perilous safety standards and extensive deforestation driven by mining

The letter also outlines the escalating risk of indigenous rights violations and deforestation in Brazil. Brazil is home to approximately 900,000 indigenous citizens from 305 tribes, most of whom live on reserves. But ongoing land conversion and threats from president Jair Bolsonaro to displace them is bringing them on to the streets. Last month, thousands of indigenous people from across Brazil protested in defence of hard-won land and cultural rights.

The Amazon has seen violence in areas of heavy deforestation where the building of large dams has brought a capital infusion, sent land prices soaring, and invited land speculation by land grabbers, loggers and ranchers. During April, nine people died in areas close to the Belo Monte megadam; in the Madeira basin near the Jirau dam; and near the Tucuruí dam on the Tocantins river in Pará state.

“We really need deep and structural change. A few people buying certified or organic food in niche supermarkets won’t be able to tackle our global crisis. Instead, we urge the EU to make trade negotiations with Brazil conditional on upholding the UN declaration on the rights of indigenous peoples, improving procedures to trace commodities associated with deforestation and indigenous rights conflicts.” It should involve consulting indigenous peoples and local communities “to define strict social and environmental criteria for traded commodities”.

The irony is there is no need for further deforestation in Brazil, as “foreseeable agricultural demand could be met entirely from improving existing farm practices and restoring degraded land, without any more conversion of natural habitats”, adds conservation specialist Prof Andrew Balmford of the University of Cambridge.

Dublin-born Kehoe is also the creator of https://www.400trees.org, a global tree-planting initiative, which highlights the fact that per person, we have lost 400 trees – three trillion in total. Separate to that destruction, “one-third of all crops grown in the world are fed to livestock, creating food in the most inefficient way”, she notes.

“It takes about 100 calories of grain to produce just 12 calories of chicken or three calories worth of beef, for instance. People need to eat food, but feeding animals so much of the grain that humans could directly eat is exacerbating a culture of waste.”

Left intact, a 2018 study showed the Amazon rainforest in Brazil could be worth almost €8 billion annually

“You can’t put 100 per cent of the responsibility on citizens. It’s close to impossible to live a sustainable life in a deeply unsustainable system. People are trying to make a difference via marches and individual activism, but ultimately, big changes have to come from the top,” Kehoe says.

Left intact, a 2018 study published in Nature showed the Amazon rainforest in Brazil could be worth almost €8 billion annually; so like most things, it’s worth more alive, than dead. Shortsightedness is the last thing the EU needs to have at this crucial point, she says.

Brazil is firmly committed to reconciling agricultural production and environmental preservation, and that conciliation was not only desirable but also fully achievable, its government insisted. In response to the letter, it has outlined a series of initiatives it has undertaken with a view to widespread adoption of sustainable practices. On deforestation, it noted this approach meant that in the 10 years between 2004 and 2014, deforestation in the Legal Amazon fell from 27,700sq km to 4,800sq km; “a significant reduction” of 82 per cent.

Kehoe says the evidence suggests otherwise and Ireland as a member state should respond accordingly.

“We are asking that this support is translated from words to action,” she adds. “The Irish Government needs to stand up for EU values and listen to this call. Ireland is consistently ranked close to the bottom of the list of EU countries for climate change mitigation actions. This is an opportunity to improve our record.”