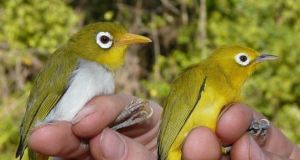 Two new bird species have been discovered by zoologists from Trinity College Dublin while on research trips to the Indonesian islands.

The Wakatobi white-eye and the Wangi-wangi white-eye birds may have been found by the Irish team on islands close to each other but they are very different species.

Details of their discovery on the Wakatobi Archipelago of Sulawesi in Indonesia are published in the Zoological Journal of the Linnean Society, the journal in which Charles Darwin and Alfred Wallace published their game-changing original ideas about the evolutionary process by which populations evolve to become distinct species in 1858.

Precisely defining what a species is and how species arise has intrigued scientists for centuries, explained TCD professor of zoology Nicola Marples, “and while we may feel we intuitively know what a species is, the closer we look, the more complicated things become.”

“Even if we accept the complications inherent in the definition of species, there is still so much we have to learn about how new species arise. Thinkers from Aristotle to Charles Darwin and onwards have spent their lives working to understand this topic,” she added.

Since 1999, her group has been studying birds on Sulawesi, known for its weird and wonderful plants and animals, and its offshore islands. Using a new research approach, and working with partners from Halu Oleo University and Operation Wallacea, they combined genetic, body size and song indicators as a means of comparing organisms.

“Differences in bird song are particularly important as birds use their songs to find their mates; if separated populations of birds sing different songs, they won’t interbreed, which enables them to evolve in different directions,” Prof Marples said.

White-eyes as a group have spread and speciated more rapidly than any other birds. They are adaptable, feeding on a wide variety of fruits, flowers and insects.

“To find two new species from the same genus of birds in the same island is remarkable. The Wangi-wangi white-eye is a particularly special discovery, as it is found on only one tiny island and its closest relatives live more than 3,000 km away,” she added.

“These discoveries are not just of evolutionary interest – they will also be of real conservation relevance.” said lead author Dr Darren O’Connell of TCD, who is now working at UCD.

By highlighting unique species special to the Wakatobi Islands they could help safeguard remaining habitats, which are under huge pressure. “We ultimately hope to have the islands recognised as an endemic bird area so they receive more conservation support.”