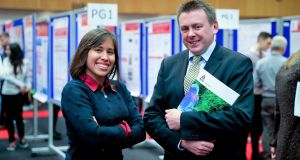 Dr Arlyng Gonzalez-Vazquez and Prof Fergal O’Brien: “If we can at least target early intervention to try to restore bone to healthy levels in older people that would be a huge advance,” says Prof O’Brien

The remarkable bone-healing powers of children have been transferred into adult cells in a major breakthrough by scientists based in Ireland.

Scientists and doctors have long known about the huge difference in the healing ability of children when it comes to bone and other tissues.

“If one of our children falls and ends up breaking one of their bones, at least they will repair that bone very quickly,” says Fergal O’Brien, professor of biomedical and regenerative medicine at the Royal College of Surgeons in Ireland (RCSI) who lead the research.

“But if you or I fall, it is going to take a much longer period of time and what we are trying to do is understand why that is, and to take that knowledge, apply it using a biomaterials system to a therapeutic that can repair defects quickly in adults,” O’Brien adds.

The therapeutic that has been developed by RCSI is a drug therapy based on a bone-repair gene called JNK3. The gene can be used to switch on child-like bone-healing powers in adults, and even older people, whose cells have lost much bone-regenerative ability.

This new therapy has the potential to save the lives of the 20 per cent of older people who die soon after suffering a bone fracture and improve on current treatments for those who have bone defects, severe bone injuries or bone-weakening osteoporosis.

O’Brien says this new therapeutic approach has the potential to change how bone injuries are treated because the goal is to stimulate the body to repair itself rather than rely on invasive procedures.

In this research, the goal is to restore the adult’s ability to repair bone tissue, but in future, a similar approach could be taken to repair any of the body’s tissues or organs, such as heart, liver, skin or eyes.

In 2016 in Ireland, 3,608 people aged over 60 were hospitalised with a hip fracture, according to the National Office of Clinical Audit. This is a serious life-threatening injury for many elderly people.

The root cause of fractures can often be due to osteoporosis, which causes loss of bone tissue and bone weakening. The Irish Osteoporosis Society estimates that 200,000 people in Ireland have osteoporosis.

“Hip fractures are very, very serious and we often see these fractures in relation to the disease of osteoporosis,” O’Brien notes.

“And if you get a hip fracture in your 70s you have got a 20 per cent chance of being dead within a year post-fracture. If we can at least target early intervention to try to restore bone to healthy levels in older people that would be a huge advance.”

The human skeleton only reaches maturity in the teens or 20s, when a person’s growing bones finally fuse together and stop growing. This bone maturation process is well known to doctors and scientists, but surprisingly little is known, up to now, about the science behind why children’s bones can heal so much quicker than those of adults.

The RCSI researchers received donations of children’s stem cells – cells that have the ability to develop into any other cell – from patients at Temple Street Children’s University Hospital with the consent of their parents, and support of its specialist plastic surgeon Dylan Murray.

The children’s stem cells were subject to a genetic screening analysis to try to identify any factors the children had that the adults did not have, which could account for children’s superior bone-healing ability.

“As we did that we identified one specific gene that seemed to change and seemed to become downregulated as you got older,” O’Brien says.

The scientists identified JNK3 as being a master repair gene responsible for superior-bone healing in children and confirmed the repair gene was not working as efficiently in adults.

The researchers then designed a follow-up experiment to test whether the active form of JNK3 could have an effect if it was inserted into adult cells.

This was done by inserting the gene into a 3D porous biomaterial scaffold – a mix of porous materials designed as a template to mimic the native bone tissue, at RCSI – which was constructed in such a way as to activate the master repair gene once it was placed into adult bone.

The biomaterials work by soaking up stem cells that are present in the tissue in which they are placed – in this case damaged adult bone tissue – and encouraging them to grow new healthy bone.

The researchers found the repair gene was remarkably effective in enhancing bone production by adult cells.

This remarkable finding opens the door to the repair of even very severely damaged or fractured bone, using the biomaterials and the active repair gene, according to O’Brien.

Dr Arlyng Gonzalez-Vazquez, research fellow in the RCSI tissue engineering research group and the Amber Centre, ran the experiment, which confirmed the repair ability of activated JNK3 in adults. “We were amazed to see that those adult stem cells were again behaving like children’s cells,” he says.

The children who donated cells for the experiment were between nine and 10 years of age, while the adult cells came from young, healthy adults aged between 20 and 30 years old.

The experiment showed that the repair ability of children was far superior to that even of of young healthy adults in the prime of life, says Gonzalez-Vazquez.

The next step was to test whether the repair gene worked in vivo, in live animals, as well as just adult cells in the laboratory.

The impact of the drug therapy was found to be just as dramatic in adult animals, with even very severe bone defects being repaired in just four weeks.

The RCSI scientists are now reaching out to the medical community to see whether surgeons are open to the idea of using the new therapy in bone-repair procedures.

The vision is that the RCSI biomaterials would be inserted along with the activated repair gene into damaged bone tissue by the surgeon, while the surgeon is working to repair the fracture, O’Brien points out.

They want to set up a collaboration that would enable the therapy to be tested in human clinical trials.

“Our main target for this new therapy would be adults that have suffered any type of bone trauma, or have a huge defect,” adds Gonzalez-Vazquez. “Or older adult patients that are suffering some sort of bone imbalance, such as osteoporosis.”