Have your say in the future of space science 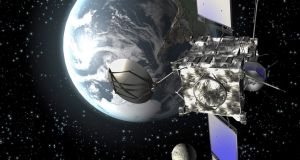 A computer animation provided by European Space Agency (ESA) in Darmstadt, Germany showing the ESA satellite Rosetta during its approach on earth. Rosetta reached the comet’s orbit in August 2014 after its launch from Earth in 2004. Photograph: C Careau/ EPA

Space research pushes the frontiers of our knowledge – in recent times it has “caught” a comet, detected ripples in spacetime called gravitational waves and shown us what a black hole really looks like. So what will it do in the future? The European Space Agency (ESA) is looking for input through a public consultation on space science, and it needs your help.

“We have just started our next long-term planning cycle, Voyage 2050, which will cover the period 2035-2050,” Dr Karen O’Flaherty explains, a scientist at ESA’s Science Directorate.

“As with previous planning cycles, this is driven by the science community in Europe. Now, for the first time, we are also inviting the public to help shape this future space science programme. We would like to hear about what they think are the most important questions that future space science missions should tackle,” she adds.

Taking part in the worldwide survey could have a far-reaching influence, because space science missions can take decades. For example, the Rosetta mission that launched in 2004 to rendezvous with Comet 67P/Churyumov-Gerasimenko and drop a lander on its surface in 2014 has its roots in the Horizon 2000 programme, an even earlier plan that started in the 1980s.

If you are over 16 you can take part through a short, online survey about Discovering our Universe and you need no specialist knowledge to complete it, explains O’Flaherty, who encourages people in Ireland to have their say. “As well as hearing from space scientists or people studying Stem subjects we welcome views from people from all walks of life,” she says. “We want the input to be as broad and diverse as possible.”

More information is available through the following link: http://www.esa.int/Our_Activities/Space_Science/Help_shape_ESA_s_space_science_programme – over 16s can take part in the survey here: http://sci.esa.int/discovering-our-universe/survey/

Make your way with maths

With State exams coming up, school students around the country are hitting the books, but what if they need a little help in the maths department? Enter Project Sums, a free drop-in initiative in Tallaght that sees tutors provide maths learning support for students and build their confidence and abilities with maths.

Based on the Maths Support Programme for undergraduate students in University College Dublin, Project Sums works with about 80 students who are in fifth and sixth year of secondary school, and has been running since January. The sessions take place at locations in Tallaght and Dublin city centre on Tuesday evenings.

“The tutors are mostly current and retired teachers or people who studied maths in college, and students often take part in groups of friends who work together on maths problems and get a real sense of achievement when they come up with a solution together,” co-founder Rachel O’Connor says.

“Sometimes students come in for a couple of weeks, though some have been coming to the sessions since January. In many cases the tutors and students get to know each other and work on maths problems each week. The tutor can then figure out what the student needs to work on.”

O’Connor studied maths and science education at UCD and is currently doing a Masters in maths education there. She and UCD business graduate Eoin Sheehan hit upon the idea to set up up the community initiative, which it has been supported by Senator Lynn Ruane.

The hope, according to O’Connor, is that it takes away some of the negative attitudes to maths. “We want to help students to enjoy the maths process rather than seeing it as something they just have to do to get a mark in an exam,” she says.

For more information about Project Sums, see @projectsums on Twitter or email Project.sums.ireland@gmail.com