‘We put the tag on a miniature harness, like a little backpack’

Data from swifts who fly 10,000km from Africa to these shores tells a remarkable story 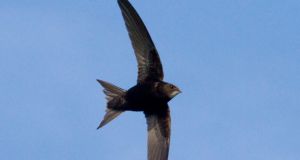 Swift populations are free falling; in the last 15 years, they’ve gone down by 46 per cent. ‘My notebook goes back 40 years,’ says bird expert Eric Dempsey. ‘Their decline has been very dramatic.’

Last summer, ornithologist Will Hayes of Birdwatch Ireland spent four months walking the streets of Tipperary’s towns and villages in search of swift nests. Tucked in the roof space under the eaves of buildings, these nests are not the easiest to find with the naked eye. “Most people thought I was a TV inspector with binoculars,” he says.

What he found – or didn’t find – was significant. A community care centre in Clonmel had one of the largest known swift colonies in the country, but overall, numbers were low. “Locals said they’d all seen a decline,” he says. Out of 86 towns, Hayes recorded nests in just 24 of them. “Many people don’t have a notion about swifts. One man had eight nests under his eaves – he said he’d never seen a swift in his life. These birds come from Africa, and the only time they land is in the gap in your house. He was delighted when I told him – his eyes lit up! That’s what we need.”

Swifts arrive in Ireland in May having travelled 10,000km from Africa. Their migratory route is still a bit of a mystery but a scientist who is trying to piece it together is Dr Kendrew Colhoun of the RSPB in Northern Ireland. He’s the ultimate swift stalker, and is filling the data gaps by tagging the birds with fingernail-sized solar-panelled trackers which log their every move.

Swifts weight the same as a Creme Egg, so this technology has to be feather-light. “We put the tag on a miniature harness, like a little backpack. When they return to Ireland, I take off the tag and download the data,” says Dr Colhoun. The data tells a remarkable story. “Swifts are travelling across 26 countries on a single journey between Ireland and Africa – from the UK, France, Spain, Portugal, all the way down to Congo, Angola, Botswana and Zambia.” Dr Colhoun reckons that they fly 40,000km a year.

Swifts come here to feed and breed. They pair for life (some can live up to 20 years) and return to the same nest site every year. But this is where they – sometimes, literally – hit a brick wall, because if the building has been renovated or the eaves blocked, then the swifts are immediately nestless. “In Banagher, two roofs were replaced in the town and we lost two colonies,” says Ricky Whelan of Birdwatch Ireland. “They return from Africa, try to find their nests but they can’t get in. It freaks them out, they get agitated and it can take them years to find a new nest.”

In 2011, Lynda Huxley noticed that swift numbers around her workplace in GMIT Castlebar campus were low. She got funding from Mayo County Council to put up artificial nest boxes and within three years the swifts were breeding. “Lecturers donated money for cameras in the boxes because people wanted to know what has happening inside,” she says. “We now livestream the nests every summer.”

Huxley’s approach is to encourage councils to put hollow “swift bricks” in all public buildings so that the birds have somewhere to nest. “Swifts are icons of urban spaces. My goal is to identify one building project in every town – Castlebar’s swimming pool, Louisburgh’s school, Westport’s town hall,” she says. “But to have a secure future for swifts, we need commitment from Government.”

If the weather is cold and insects are hard to find, the chicks will reduce their heart activity for a few days

As they sit in the nests and grow, swift chicks are hungry, insatiable creatures and their soot-brown parents are constantly hunting for insects to feed them. Large waterbodies can provide rich pickings for the birds to catch aerial insects such as flying ants, spiders and flies. “A big surprise is that swifts who nest in urban Belfast will do a 50-mile commute to Lough Neagh to feed,” says Dr Culhoun. They store hundreds of insects in a throat pouch before regurgitating the golf ball-sized bolus into their chicks’ throats. If the weather is cold and insects are hard to find, the chicks will reduce their heart activity for a few days until the parents return and cough up.

Could it be that swifts have to travel longer distances to find enough food because insects numbers are plummeting? Scientists don’t know for certain because there’s a chronic lack of long-term, large-scale data on Irish insects, but hunger is undoubtedly a factor. “Swifts are limited by insect abundance,” says Whelan. “On current projections, for the next 20 years, I think there will be further reductions in numbers. At some point the population will be too small to sustain itself.”

Swifts are most comfortable in the air. Their legs – if you could even call them that – are stubby. “If you watch them walking around the nest, it’s like humans trying to walk on our elbows,” says Huxley. Before they leave the nest, chicks will do push-ups to prepare their muscles for what’s ahead: three years of constant flying until they reach sexual maturity. Once they take off, they become the fastest bird in level flight and reach speeds of 20 metres a second. They whoosh, swoop and swirl recklessly through the sky like aerial joyriders. It’s like watching Ayrton Senna at the wheel of a Formula 1 car.

“Swifts cannot fly slow,” says Dr Per Henningson of Oxford University’s animal flight group. “It’s unusual because most birds can fly slow. Swifts have to come into their nests at high speed and make an abrupt stop. So they don’t come in level – they come in low and use gravity to stop. In half a metre, that’s a dramatic break.”

Their adaptation to life in the air is extreme. Nap time? Up they go for a snooze. “If you’re sitting out in an evening watching them, all of a sudden they’re gone,” says Dr Henningson. “They fly 2,000 metres up and from the tracking data we see they orientate themselves into the wind and slowly turn. You can see they sleep for about 10 minutes, slowly descend and then they wake up, ascend and do the same cycle.”

Their high-pitched screeching is as distinctive as their intoxicating acrobatics in the sky. For bird expert Eric Dempsey, this ebullient yikkering was the soundtrack of his childhood. “I grew up in Finglas and my dad would bring us to the Botanic Gardens and we’d stand at the entrance and look up and there would be swifts everywhere. That screaming sound they make was the essence of Dublin in the summer. The countryside had cuckoos and corncrakes; the city had swifts. You’d watch them soar and it was mesmerising – the ultimate air show.”

Swift populations are free falling; in the last 15 years, they’ve gone down by 46 per cent. “My notebook goes back 40 years,” says Eric. “Their decline has been very dramatic.” This is backed up by research from Birdwatch Ireland. “Towns and villages in Laois, Westmeath and Tipperary now have no swifts at all,” says Ricky Whelan.

What can the public do to help prepare for the swifts’ return in a few weeks’ time? Birdwatch Ireland has a new guide that offers suggestions. If you own a building, put a swift box on it or ask your local school or church to do the same. Tell your politicians to make space for swifts in public spaces. Don’t forget that without insects, they’ll starve. “Don’t use insecticides,” pleads Lynda Huxley. “We have to remember that swifts have been around for 49 million years. Why should our actions deprive them of their existence?”