Is death still the end? Scientists spark life in brains of dead pigs 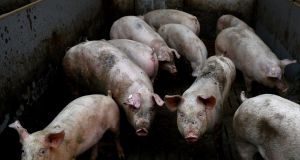 An experiment has breathed life into the brains of pigs four hours after death. Scientists in the US restored circulation and cellular activity in 32 pig brains obtained from a meat-packing plant.

While there was no evidence of re-awakening awareness or consciousness, the re-vitalised brains were said to be “cellularly active”.

The study has implications that challenge long-held assumptions about the finality of death, and opens up a new frontier in brain research.

Cellular brain death is usually considered to be swift and irreversible.

Once the supply of oxygen and blood are cut off, the brain’s electrical activity and signs of awareness vanish within seconds.

A cascade of destruction then occurs leading to widespread degeneration from which there is no turning back.

However, Prof Sestan and his team noticed that small brain tissue samples routinely showed signs of cellular life returning, even when harvested hours after death.

To investigate further, they turned their attention to whole, intact brains from pigs processed for food production.

In a ground-breaking experiment, a specially designed “chemical blood” preservative was circulated through the brains of dead animals that had been slaughtered four hours earlier.

The solution, warmed to normal body temperature, was perfused through the brains’ blood vessels for six hours.

During this time the scientists observed a reduction in cell death and the restored functionality of certain nerve, blood vessel and glial cells.

Glial cells are important brain “support cells” that hold neurons in place, feed them with nutrients and oxygen, provide insulation, and clean up the carcasses of dead cells.

The revived activity even included some synaptic function, the transmission of signals between neurons.

Details of the study are published in the latest issue of Nature journal.

Co-author Dr Zvonimir Vrselja, also from Yale, said: “At no point did we observe the kind of organised electrical activity associated with perception, awareness, or consciousness.

“Clinically defined, this is not a living brain, but it is a cellularly active brain.”

Lessons learned from the study could in future help doctors find ways to salvage brain function in stroke patients, or test the effectiveness of treatments designed to aid cellular recovery after injury, say the scientists.

The “BrainEx” system developed at Yale could also provide a powerful research tool.

Andrea Beckel-Mitchener, from the US National Institute of of Mental Health, which co-funded the research, said: “This line of research holds hope for advancing understanding and treatment of brain disorders and could lead to a whole new way of studying the post-mortem human brain.”

Any future studies involving human tissue or the possible revival of global electrical activity in “dead” animal brains would have to undergo strict ethical supervision, the team stressed.

However, it was unclear that the technique would work in a recently deceased human brain.

The chemical solution lacked many components found naturally in human blood, such as immune system cells.

Dr Stephen Latham, director of Yale University’s Interdisciplinary Center for Bioethics, said: “Restoration of consciousness was never a goal of this research.

“The researchers were prepared to intervene with the use of anaesthetics and temperature-reduction to stop organised global electrical activity if it were to emerge.