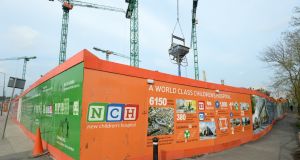 The construction of the national children’s hospital has been partly delayed because of issues with “wind exposure” on the St James’s Hospital site in Dublin, it has emerged.

New concerns about the rising costs at the hospital were also discussed at a meeting held by the project’s board in April, according to documents seen by the Irish Times.

Members of the National Paediatric Hospital Development Board met on April 3rd and received a commercial update about “additional monetary risk” that has emerged since the Government decided last December to continue with the project despite the cost rising to €1.433 billion.

The hospital has been at the centre of a major controversy due to huge cost overruns, with the bill rising from an estimated €800 million in 2014 to €1.4 billion, which is expected to increase to some €1.7 billion when other costs are factored in.

The Cabinet decided not to retender the project after receiving a report on the “guaranteed maximum price” of the project.

The documents show that members of the board discussed new risks in April despite the previous agreement of the guaranteed maximum price.

“It was noted that a presentation had been received by the joint finance and construction committee from the design team wherein it was reported that additional monetary risk had been identified on provisional sums.

“It was also indicated that additional early warnings had been submitted by contractors and that these were being assessed by the design team. It was advised that the joint sub-committee had expressed frustration that these risks were arising following agreement of the GMP and had requested a further update in two months to mitigate the risks.”

At a meeting of the Oireachtas Committee on Health on Wednesday, Fred Barry, the chair of the hospital’s development board, told TDs that the project was now facing construction delays.

He said that for each month the project is delayed past its completion deadline in 2022, the costs would increase by several million euro.

According to the minutes of the April meeting, this delay is partly because of issues with wind on the site.

“It was noted that a two-week delay had arisen on the south zone as result of wind and that BAM were exploring ways to reduce delays arising from wind exposure on site.”

The board meeting also heard details of how a second power supply is needed for “resiliency purposes”, which will come at an added cost.

Minutes of the meeting also show it will be “several months” before a new project manager is implemented.

A new chief officer is due to be appointed to the board along with a replacement for the former project manager John Pollock, who was due to step down from his role this month.

“The board noted that notwithstanding the establishment order mandating that the board shall have a chief officer, the department was insisting that a business case must be made for appointing anyone to the position.”

“The board noted the probability of a gap of several months arising between the time of Mr Pollack’s departure date and a new appointment, in light of the business case requirements.”

During Leaders’ Questions in the Dáil on Thursday, Minister for Communications Richard Bruton defended the plan and said there would be opportunities to mitigate any emerging delays in the construction of the project.

“No project of this scale is going to be risk free. Mr Barry equally emphasised that at this point, there are many opportunities to mitigate these delays over the lifetime of the project. While this project is expensive, there is no evidence anywhere that it could be done any cheaper.”

Mr Bruton also told the Dáil that eight private outpatient consulting rooms will be part of the €1.7 billion project under construction. He insisted that the private provision of care “is not a major element of this project” and “going to be at a very low level”.