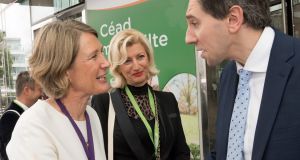 There is “hypocrisy” in Opposition TDs criticism of health budget overruns, while at the same time calling for additional services, Minister for Health Simon Harris has said.

Health spending has accelerated in recent weeks, leading to fears in Government of further overspending in the sector this year.

On Thursday, The Irish Times reported the rate of spending increase in May was a third ahead of the anticipated annual growth for the year, leading to concerns the health service will need another supplementary budget estimate to cover the overruns.

The Government had budgeted for gross current health spending – which was given an outlay of €17 billion this year – to increase 5.8 per cent compared with the previous year.

The latest figures up until the end of last month show it is in fact running 8.9 per cent above 2018 levels.

Mr Harris confirmed health spending in May had run ahead of budget, but maintained previous months did not. “Overall the health service is on profile in relation to its budgetary expenditure,” he said.

“There is a hypocrisy here from the Opposition when it comes to talking about things like fiscal prudence.”

Opposition TDs would “list a number of things that they would like us to provide for that aren’t budgeted for,” Mr Harris said. “Then on the next day you’ll hear them criticising health spending, so they can’t have it both ways.”

Paul Reid, the new director general of the HSE, has warned his senior managers that the agency must break even in 2019.

In an internal memo sent when he took up his new role last month, Mr Reid said the health service would no longer spend money it did not have, and breaching budgets could “no longer be considered an option”.

Mr Harris said he was confident the HSE could “live within budget” this year, despite the recent increased spending.

“What we have is new leadership in the HSE, Paul Reid is a very experienced, competent manager, and he’s bringing a fresh pair of eyes and a lot of experience to the job,” Mr Harris said.

The Minister was speaking after delivering a speech to the 9th Europaediatrics Congress, hosted in the Convention Centre.

Damian Roland, a consultant at the University of Leicester, who researches the effects of social media use on children, was a keynote speaker at the event.

More than six hours screen time would be classed as extreme usage, he said.

However, most negative impacts for young people only came about if they failed to exercise, socialise, or get enough sleep, as a result of their social media or internet use, Dr Roland said.

“We suddenly get worried about cyber bullying but the fact that bullying still exists, and children come to harm from it . . . we’re not up in arms about,” he said.

The role of healthcare professionals in advising parents was to highlight the known risks, and advocate for “sensible decisions” around social media and screen use, he said.