Dutch king hails ‘growing links’ between Ireland and the Netherlands

‘Dublin is showing us its past, present and future’: Royals make first official Irish visit 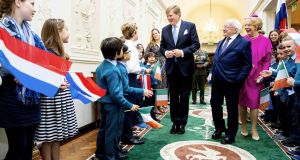 King Willem-Alexander of the Netherlands (centre) meets children as he is welcomed by President Michael Higgins (second right) and his wife Sabina (right) in Dublin on Wednesday. Photograph: Patrick Van Latwijk/AFP/Getty Images

The various job opportunities for Dutch citizens in Dublin are a “clear sign of the growing links” between Ireland and the Netherlands, the Dutch king has said.

King Willem-Alexander said he and his wife, Queen Máxima, are greatly enjoying their three-day visit to Ireland, “despite the Irish weather”.

“If you search online for Dublin in combination with Dutch, the first hit you get is Dutch speaking jobs in Dublin,” he said.

“There are all kinds of job opportunities here for Dutch speaking citizens - marketing specialists, content reviewers and even games testers, a clear sign of the growing links between our countries,” King Willem-Alexander told a reception at the Mansion House on Thursday morning.

“You can see the closeness of our relationship in all kinds of areas and one of them is mobility. Here in Dublin you are preparing to host Velo-city, the world’s biggest cycling conference, which will take place in two weeks time.”

King Willem-Alexander said it is great to see that “this sustainable form of transport is on the rise in Dublin too”.

“In the Netherlands we are now building a network of super highways just for cyclists. Dutch people cycle a total of 50 billion kilometres a year. In fact we have more bikes than people, one and a half for every person in the country,” he said.

“Dublin is showing us its past, present and future. From the golden treasures of Trinity College, some over 1,000 years old to the enterprising spirits of the Dogpatch labs, where designers and start-ups are creating the world of tomorrow,” he added.

“We even got lessons in programming from a group of young whizz-kids. Your city attracts people from all corners of the globe and that certainly includes the Netherlands.”

The three-day visit, which is the couple’s first State visit to Ireland during their six-year reign, takes place against the backdrop of intensive moves to forge closer relations between the State and the Netherlands post-Brexit.

The royals visited the Long Room in Trinity College on Thursday as well as a reception at King’s Inns for the Dutch community. They are due to visit the National Botanic Gardens in Glasnevin on Thursday afternoon and meet with the Taoiseach Leo Varadkar at Government Buildings. They will also attend a Dutch national dance theatre performance in the Bord Gáis Energy Theatre.

The third day of the visit will take place in Cork, where King Willem-Alexander and his wife will meet the city’s lord mayor at city hall. The royals will then take a boat to Cobh. They will also visit Crosshaven in West Cork to discuss volunteer initiatives, with the trip incorporating a visit Camden Fort Meagher.