Irish Government ‘driving us all’ to a no-deal Brexit – Donaldson 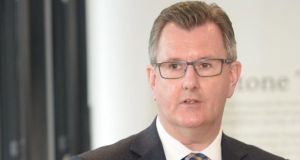 Jeffrey Donaldson and the DUP are stridently opposed to the backstop plan to avoid a hard border on the island of Ireland after the United Kingdom exits the European Union. File photograph: Dara Mac Dónaill/The Irish Times

DUP MP Jeffrey Donaldson said his party has sought assurances from a number of leadership contenders in the British Conservative party in relation to the Brexit backstop plan.

Mr Donaldson said if the backstop - the insurance mechanism to avoid a hard border on the island of Ireland - was not altered then the EU and UK were on course for a no-deal Brexit.

“That’s the reality and it is one that Boris Johnson and other leadership contenders do recognise and we have engaged in discussions with a number of those contenders and expressed to them our concern and sought assurances from them that these concerns will be addressed.”

Mr Donaldson has called for a time-limit on the backstop but said he did not want to put a figure on it “because then you’re into negotiation in public and that’s never a sensible thing”.

The DUP MP was speaking after an address on Brexit and Northern Ireland to the Institute of International and European Affairs in which he accused Leo Varadkar of being the “the first Irish Taoiseach to subcontract Northern Ireland policy to the EU Commission”.

The Fine Gael leader should instead be “emulating Seán Lemass, who tried to settle the Border issue, not by bringing outsiders in to lean on unionists but by means of trilateral talks between Belfast, Dublin and London”.

Mr Donaldson, who is the party’s chief whip, said the backstop “has been rejected by the House of Commons on three occasions and every shade of unionism in Northern Ireland opposes it. If we are to lay a foundation which the next generation, both north and south can build upon, then we must recognise, before it is too late, that there is a seismic problem with the backstop”.

He said the issue should not be treated like a “diplomatic football match where one side must win and the other lose”.

“We must step back and learn from history and work for a sensible and sustainable deal which can be supported by all sides.”

Hitting out at Mr Varadkar, Mr Donaldson said the Irish Government had not done enough to engage all communities on the Brexit issue.

Both the Taoiseach and Minister for Foreign Affairs Simon Coveney knew from an early stage that the Border was sensitive.

“But they viewed that not as a delicate matter where consensus was needed but rather as a bargaining chip which could be used by Brussels. At a time when cool heads were needed in Brussels, Leo Varadkar was photocopying articles from The Irish Times about a 1972 Provisional IRA bombing of a customs post.”

Mr Donaldson was referring to a dinner of European leaders in Brussels where Mr Varadkar presented a copy of The Irish Times to emphasise the importance of the Border issue in Brexit discussions.

Mr Donaldson said he believed the Irish Government was “driving us all” towards a no-deal Brexit and said he was frustrated by Mr Varadkar’s approach to the issue.

“There is no correlation between EU membership and terrorism on this island. What frustrates me further by Leo Varadkar’s approach is that no one was even talking about building Border posts in 2018, other than the Sinn Féin amateur dramatics society in South Armagh. What we have witnessed over the last two years has been the politics of turning ploughshares into swords rather than the swords into ploughshares.”

Responding to Mr Donaldson’s speech, the Labour Party leader Brendan Howlin said he was “reluctant to get into a slagging match” with the DUP but “there are a number of points that need to be made”.

“Ireland is a fully-fledged member of the European Union. We recognise that the Irish Border is also an EU frontier and we are satisfied that the EU is currently representing Ireland’s legitimate interests. We will not be codded into a big state versus small state narrative that Brexit Tories believe is our only role vis-à-vis our larger neighbour,” Mr Howlin said.

“For their own part, the DUP have some reflection to do. Northern Ireland did not vote to leave the European Union, and pro-EU sentiment was visible in the recent European election result. No amount of DUP positioning will hide its failure to represent the will of the people of Northern Ireland.”

All sex crime suspects should keep anonymity unless they are convicted, report recommends 07:43
Garda taking too long to set up unit to investigate sex crimes, says expert group 07:00
Ex-solicitors charged with fraud over theft of six-figure sum from banks over 18 months 06:06
No time limits and no pre-booking: what the unpublished pub reopening guidelines reveal 05:51
‘Hammer blow’: Pub reopening delay alarms rural TDs 04:00