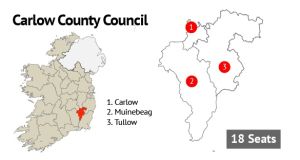 Loses for Sinn Féin and Fine Gael resulted in wins for Independents, Fianna Fáil and, for the first time in the county, Solidarity - People Before Profit, in Carlow’s 18-seat county council.

With three local electoral areas in the county, the largest was the seven-seat Carlow area.

Local and European PBP candidate Adrienne Wallace secured her place on Carlow County Council by taking the fifth seat in the Carlow LEA, outpolling Fine Gael candidate Wayne Fennell in a tense final count. Her success is a first for the party in the county.

Poor national trends for Sinn Féin were reflected in Carlow, with the party losing two seats, a blow following their success in 2014.

Fine Gael suffered the loss of long-standing councillor Denis Foley in Muinebheag, bringing to an end 40 years of public service for the Bagenalstown based councillor. However, Tom O’Neill managed to win back a seat for Fine Gael in the Carlow LEA.

It was a good election for the Independents in the county with Charlie Murphy polling well with 1,396 first preferences to take the second seat in the Tullow LEA, while Independent John Cassin held his seat in the Carlow LEA.