Clare County Council: ‘When you are reared, I am running for election’ 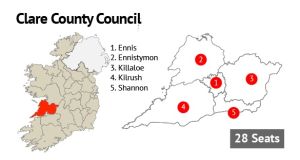 Fianna Fáil has increased its number of seats on the 28-seat Clare County Council after increasing its share of first preference vote by 3 per cent to 39 per cent.

On Sunday afternoon, veteran councillor Pat McMahon (FF) secured one of the last remaining seats in the Shannon electoral area to give the party 13 seats – an increase of one on the outgoing council.

Party poll topper in Clare with 2,575 first preference votes, Fianna Fáil councillor Cathal Crowe said the 13 seats “is a fabulous result bearing in mind that we had three high-profile councillors who retired coming into this election”.

“So really, we went in the election with nine outgoing councillors and picked up four seats – one in Ennis, two in Ennistymon and one in west Clare. That is a very good performance.”

With no party having an overall majority, power-sharing at the council is set to continue. Mr Crowe said that power-sharing amongst the parties “has worked very well over the past 15 years”.

Fine Gael’s share of the vote remains static at 32% when compared to 2014 and the party maintained its seat share at eight.

On Sunday night, tension was high at the count centre after a full recount was called by new FG candidate Garreth McPhillips after a recheck of ballots found that Mr Phillips and Mr Gerry Flynn were in a dead-heat for the final seat.

After the full recount, Cllr Flynn was declared the winner after 8.30pm and retains his seat.

On Saturday, the party suffered a blow when Bill Slattery endured a shock defeat in the Ennistymon area where he was the only incumbent councillor running and had been tipped to top the poll.

The new council has five new faces and one of those is Green Party candidate Roisín Garvey, who benefited from the ‘green surge’ across the country. Ms Garvey’s election comes 20 years after she made a promise to her unborn son in an overcrowded hospital room that she would run for election some day.

At the count centre in Ennis, she recalled: “I was seven months pregnant with with 80 other women in pre-natal services in Ennis. There were 35 chairs – not even enough chairs – and we were all told to be there for 2pm and we all had to wait two and a half hours. I looked at my stomach and I said to my child, ‘when you are reared, I am running for election, this is not good enough’.”