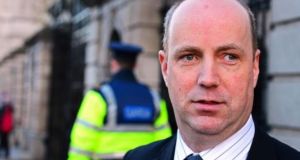 Fewer people are waiting for home help today than there were this day last year, Minister of State for Older People Jim Daly told the Dáil on Thursday. File photgraph: Eric Luke

Minister of State for Older People Jim Daly has insisted that there is no freeze on the provision of home help hours and no cuts in the allocation of hours.

“There will be € 8 million available next week and a further € 8 million in the following and subsequent weeks. There is €400 million plus in the year,” he said as opposition TDs highlighted the 6,000 people on a waiting list for home help care.

He told Sinn Féin TD Pat Buckley that “as a matter of absolute fact, fewer people are waiting for home help today than there were this day last year”.

“Every week the Government provides € 8 million to the HSE to provide home help.”

Mr Buckley said there was no backlog or waiting list in his Cork East constituency but he expressed concern that the annual allocation for funding would be used up by the end of July with the prospect of a major crisis.

Earlier, Minister for Communications Richard Bruton said 1,500 new patients received care each month but he conceded that there is a waiting list.

“Demand is very high and there are, unfortunately, people waiting,” he said.

Fianna Fáil deputy leader Dara Calleary said 6,000 people were on the waiting list for home help support.Families were being forced to pay for expensive private care while people capable of living at home were languishing in hospital because they could not get home help, he said.

Mr Calleary claimed the Government was ignoring the warnings by health professionals about the strain on hospital services.

“You don’t get it – you don’t understand what this is doing to patients and their families. You don’t join the dots on the impact it’s having on hospital services.”

Mr Bruton said the Government was well aware of the issue.

The Minister said that Health Service Executive was managing a nationwide allocation of 18.3 million hours of home care hours. He added the system was under review and Mr Daly was working to develop a new statutory home help scheme with officials and it was well underway.

Sinn Féin finance deputy leader Pearse Doherty said it costs €6,000 a week to keep someone in an acute hospital bed, but home care packages cost €160 a week. He said “the Government and the HSE have decided to suspend all home help hours for new applicants up until November. It makes no sense whatsoever.”

Mr Burton said less than 4 per cent of delayed discharges were due to lack of home help.

“This is an area where there is huge growing need but we are looking at a statutory scheme that will be developed.”