After emotional meeting with cross-border orchestra, delegates had tears in their eyes 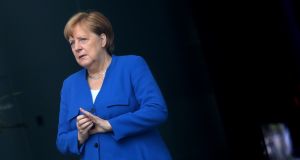 Stephan Albani said German leader Angela Merkel’s willingness to talk with a new British counterpart should not be interpreted as a willingness to compromise Irish interests, shared by Germany throughout the Brexit process. Photograph: Hayoung Jeon/EPA

German Bundestag MPs visiting Ireland insist that Berlin’s support of Dublin in the Brexit process remains firm, irrespective of who is chosen as new Tory leader and British prime minister.

The six-head cross-party delegation from Germany on Friday concludes a four-day tour of Ireland that has seen it travel from Cork harbour to the Border near Dundalk.

Delegation head Stephan Albani, an MP with Chancellor Angela Merkel’s ruling Christian Democratic Union (CDU), dismissed the significance of her reported remarks last week to Tory leadership hopeful Jeremy Hunt. According to the British foreign secretary, Dr Merkel said the EU was “willing to negotiate” on a new Brexit package if a new prime minister had the “right approach”.

Mr Albani said the German leader’s willingness to talk with a new British counterpart should not be interpreted as a willingness to compromise Irish interests, shared by Germany throughout the Brexit process. This was non-negotiable and would not be diluted even by German economic interests in the UK, he said, because “an EU that shows solidarity with every member is the only Europe we can imagine being a member of”.

“I know from CDU parliamentary party conversations that there is a readiness to talk, as long as the interest of the people here are respected to prevent violence flaring up again,” said Mr Albani, speaking in Dundalk.

“I find it a remarkable success of the peace process in the last years that people in London have forgotten how fragile a situation still exists here.”

Five of the Bundestag’s six political parties were represented on the trip and, Mr Albani said, and all agreed that a hard border would be unworkable on a day-to-day level for Border communities and businesses. They are doubtful about promised “technical” solutions: cameras could be torn down, to be replaced by Border police who, if attacked, would be replaced by soldiers, triggering a downward spiral that, Mr Albani said, “nobody wants”.

After an “emotional” meeting on Thursday with the Cross-border Orchestra of Ireland, Mr Albani said he and some other delegation members had tears in their eyes.

“Any politician who deals with Brexit should be obliged, every morning and evening, to watch YouTube videos of this orchestra,” he said, “to understand what we are working on, how things cannot fall back to where they were.”

As well as Brexit discussions, the MPs held talks in Leinster House and met business leaders to discuss closer Irish-German relations in the years ahead.

After a meeting with the Office of the Data Protection Commissioner, Mr Albani said some delegation members were doubtful the DPC has enough staff to regulate effectively tech giants such as Google, Facebook and process hundreds of active claims against them. He said closer European co-operation was essential here to support the DPC’s work.

Looking beyond Brexit, the MPs have called for increased German-Irish university, research and school exchange partnerships.

“Ireland will have the last native English-speaking universities in the EU so I think closer co-operation is absolutely necessary,” he said.

Closer German-Irish co-operation will loom large when President Michael D Higgins makes a three-day state visit to Germany from July 3rd to July 5th. He will visit Berlin, Frankfurt, Leipzig and Würzburg, the first such visit by an Irish president since 2008.