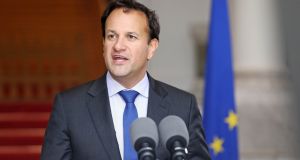 Taoiseach Leo Varadkar said the alternatives to forming a government if the programme for government is rejected were not appealing. Photograph: Julien Behal/PA Wire

Taoiseach Leo Vardkar said the country “needs a majority government” as it faces into what could be a very difficult recession due to the coronavirus pandemic.

In what could be his last broadcast interview in officeon RTÉ’s Prime Time, Mr Varadkar said if one of three parties rejected the programme for government, he would meet the leaders of all the political parties to discuss next steps.

This would include Sinn Féin leader Mary Lou McDonald, but Mr Varadkar said this would only be to explore the reasons why Fine Gael could not enter into coalition with her party.

However, in the event that the programme for government was rejected, the Taoiseach said the alternatives to forming a government were not appealing.

If the Green Party rejects the deal, Mr Varadkar appeared to rule out a coalition with Fianna Fail supported by Independents. His stated preference has always been for a coalition of three parties.

He also said he was not enthused by the prospect of being voted back in as Taoiseach for a single day in order to appoint the necessary number of Senators required to renew criminal justice laws underpinning the Special Criminal Court which are due to lapse.

“I am not ruling it out, but I have no desire to pursue it,” he said, instead reinforcing his stated desire for a strong majority government.

He said it was “not a good option” but that it was important the Offences Against the State Act was renewed.

Fianna Fáil leader Micheál Martin has said a second general election in 2020 cannot be ruled out if the Green Party votes down the programme for government deal. If the deal was voted down, Mr Martin said his party would talk to Independent TDs about forming a government.

Mr Varadkar said, even if the Green Party votes against the deal he would remain faithful to his party’s commitment to a 7 per cent annual reduction in carbon emissions.

Asked out the anticipated easing of restrictions on Monday, Mr Varadkar urged caution in relation to the easing of rules on air travel.

On Tuesday, a report by the Taskforce for Aviation Recovery called on the Government to lift quarantine rules on incoming passengers by next week.

The Taoiseach said any easing of air travel restrictions must be done carefully and along air bridges with specific countries to avoid the risk of “reimporting” virus cases.

Mr Varadkar also disputed claims made by the head of the Irish nurses’ representative body about Covid sickness among healthcare workers as inaccurate.

On Tuesday, the Oireachtas Covid-19 Committee was told that Irish healthcare workers had the highest global rate of infection.

Statistics presented to the committee claimed that up to the end of May, a total of 8,018 cases of infection of healthcare workers were reported.

However Mr Varadkar said he checked the information given by Ms Ní Sheaghdha with the Health Protection Surveillance Centre (HPSC).

“At least, according to them, the figures that she gave were not accurate,” he said. “I think she suggested that 60 per cent of healthcare workers were still sick with Covid. That is not the case; [THE]HPSC says 90 per cent have recovered.

“And they say that we have had 8,000 positive cases out of a healthcare workforce of 250,000 so that’s between a 3 and 4 per cent positivity rate. So they are saying that that was wrong.”

Mr Varadkar added, however, that 8,000 healthcare workers did contract the virus and there was a need to ensure those working in the sector are protected.

As regards the possible spread of Covid-19 in Ireland following a relaxation of restrictions, the Taoiseach said localised outbreaks were likely and that in such circumstances localised lockdowns would be required, but that these could then be controlled with robust contact tracing systems.

A recent outbreak at a German meat processing plant triggered a return to lockdown conditions in the western state of North Rhine-Westphalia.

Mr Varadkar said he was confident Irish people would understand any similar necessity here “if it’s necessary to contain a virus in a particular place or a particular area”.

1 Children found dead in their Dublin home were murdered
2 The real Contagion virus is out there and it’s causing virologists to worry
3 Young homeless mother may have been dead in tent for a number of days
4 Three killed, several wounded in knife attack in French church
5 Cork shootings: Gardaí believe older son was shot multiple times
Real news has value SUBSCRIBE