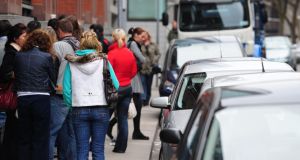 Up to 400,000 people may be unemployed in the State at the end of the year, the Oireachtas Covid-19 committee has been told.

The secretary general of the Department of Public Expenditure and Reform Robert Watt said this would mean there would be 200,000 more people without jobs than was the case at the beginning of this year.

Speaking at the Oireachtas committee examining the State’s response to Covid-19, Mr Watt said there would be a significant deficit in the public finances both this year and next year.

He said “a delayed recovery in the economy, for example, could see a deficit of up to €30 billion this year”.

Mr Watt said the health service spent an additional €1 billion over its original budget up to the end of May dealing with the Covid-19 pandemic.

He said the Government had allocated an additional €1.83 billion to the health service overall to deal with the coronavirus crisis. He said it remained to be seen how close ultimately the health service came to this figure when all the bills incurred during the pandemic so far came in.

The secretary general of the Department of Employment Affairs and Social Protection John McKeon said that for every euro the State is likely to raise in income tax this year, it will pay out about €1.60 on social welfare.

Mr McKeon said there was “now no doubt but that the measures taken to flatten the peak and reduce the impact of the pandemic on demand for health services had the effect of transferring that peak into the labour market and that demand onto the department’s jobseeker supports”.

“On Friday, March 13th over 20,000 people arrived at our Intreo centres to submit jobseeker claims. It was clear that we could not cope with that level of demand, so over that weekend we developed and commenced implementation of what would become the pandemic unemployment payment.”

Mr McKeon said the Government had announced that Covid measures taken to date, originally intended to last for 12 weeks, would be extended to August.

He said that how these changed and developed over coming months would depend on progress in supressing the virus, restoring business activity and on the ability of the State to finance the extraordinarily high levels of expenditure being incurred.