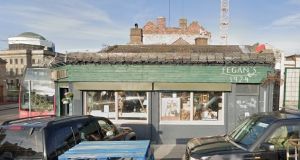 A cafe located behind Dublin’s Four Courts has been operating a sit-in service for almost three weeks ahead of the permitted reopening of cafes and restaurants next week.

Fegan’s 1924 Cafe on Chancery Street, 200m from Bridewell Garda station, is allowing customers to use its indoor tables, despite the cafe and restaurant sector being restricted to operating take-away services until June 29th under coronavirus regulations.

Cafe owner James Fegan said he was providing a service particularly for barristers who would have “nowhere else to go” if the cafe was not available to them. He said gardaí had also been using the cafe’s toilets when it was not practical for them to return to the Garda station.

Mr Fegan said he had operated a take-away service for approximately six weeks but was now in his third week of providing an indoor service, in line with 2m distancing of tables and a strict hygiene and cleaning regime.

“About 85 per cent of our business comes out of the Four Courts. We would get a lot of legal eagles in here, people giving advice to clients. They haven’t got the space in the courts and we would be the closest place for them to use a table. The likes of barristers would have nowhere else to go.”

Mr Fegan said he was only allowing regular customers to sit in, with those he did not know being restricted to take away only.

“During the Gemma O’Doherty and John Waters case there were some protesters who wanted to come in, but we didn’t allow that. I have no problem with protesters but we didn’t know them. But we did have guards in using the toilet at that time.”

Mr Fegan said his business differed from a standard cafe or restaurant in that it was part of a cash and carry.

“The cash and carry and wholesale business has continued all the way through, so given we were here anyway we thought we might as well keep the cafe business going.”

The cafe is “fully sanitised” at the start of every morning and before and after lunch, while the tables and chairs are cleaned after every sitting, Mr Fegan said. Staff had undergone health and safety training, including training on how to reassure customers who might be nervous to return to cafes.

As he had opened ahead of the official date of June 29th, he had been asked to advise other cafes and restaurants ahead of their reopening next week. Mr Fegan said he had not been asked by the Garda or any other authority to stop serving customers indoors.

An Garda Síochána “do not comment on individual establishments” a spokeswoman said. However, she said: “Establishments selling food and beverages are permitted to do so on a takeaway basis only. Seating areas are not permitted under the regulations. Gardaí will continue our policing response with the 4Es of engage, educate, encourage, and, as a last resort, enforce.”