No change in regulations to include coronavirus as occupationally-acquired illness 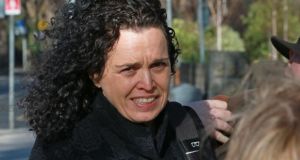 Ireland has the highest rate of infection from coronavirus of all health workers globally, the Oireachtas Covid-19 committee has been told.

General secretary of the Irish Nurses and Midwives Organisation (INMO) Phil Ní Sheaghdha, who described the figures as “an absolute scandal”, also said nurses “have been applauded and they have been abandoned” by the HSE and the State as they struggle to balance work with childcare.

And she said it was “wrong and a mistake” that the Department of Business will not alter regulations to include Covid-19 as an occupationally acquired illness.

She told the committee that the regulations must be changed to allow the Health and Safety Authority (HSA) examine the reasons behind the figures.

Siptu Divisional organiser Paul Bell said a number of EU states recognised Covid-19 as an occupationally acquired illness and he could not understand why Ireland was not doing the same.

Speaking at the committee, which is looking at the impact of the pandemic on childcare, Ms Ní Sheaghdha said that, based on contact with the International Council of Nurses, Ireland’s figures for infection were the highest in the world.

Figures from the INMO showed that up to the end of May, a total of 8,018 cases of infection of healthcare workers were reported. Some 66 per cent or 4,823 remain out sick, and of that number 1,600 are categorised as nurses and midwives. Ms Ní Sheaghdha said “this puts enormous pressure on rosters”.

She told Fianna Fáil health spokesman Stephen Donnelly that the lack of personal protective equipment (PIPE) was a major issue.

The INMO, she said, was forced to lobby the HSE to make it mandatory for healthcare workers to wear face masks. In one case, a nurse was sent home for wearing a mask, having been advised that it was against HSE policy.

She said “face masks should have been mandatory” from the start for all healthcare workers in healthcare settings, and that infection rates fell dramatically once masks were made obligatory on April 22nd.

Mr Bell said the union had to supply face masks to staff early in the pandemic. He pointed out that the HSE announced a survey which showed that 7,000 healthcare workers required childcare, but said Siptu was unaware of any survey, or of any member being offered or asked about such a survey.

Taoiseach Leo Varadkar disputed the INMO figures. Speaking to RTÉ on Tueday night he said that the Health Protection Surveillance Centre said it was not accurate to say more than 60 per cent of health workers remained ill. He said Over 90 per cent had recovered.

Meanwhile, a survey by the INMO found that 60 per cent of nurses faced additional expenditure to enable them attend work. Some had a relative live with them to provide childcare, or ended up using all their leave and taking unpaid leave to mind their children because of lack of alternatives.

The committee was told that in one case it cost a nurse in South Tipperary General Hospital €150 a week more to go to work than the nurse earned.

The INMO and Siptu called for the costs to nurses and midwives of attending work to be repaid to them, and said they should get preferential treatment when childcare services returned to maintain their employment contracts.

Ms Ní Sheaghdha said that 88 per cent of those infected who work in the health service got the virus at work and had to absent themselves for 14 days.

Childcare has always been a very difficult issue and became huge when creches closed down, she said.

Greens to hold online meetings over EU-Canada trade deal 04:45
Tusla failed to respond to teen’s ‘high priority’ case before death 04:03
Sinn Féin says Varadkar’s excuse for leak is ‘in tatters’ 03:01
Passengers without valid PCR tests could face compulsory quarantine 01:44
Special schools may be permitted to reopen on a voluntary basis 01:15