Fauci warns of ‘disturbing surge’ in US coronavirus cases

Dr Anthony Fauci tells Congress he was never ordered to slow down on coronavirus testing, apparently contradicting a comment made by President Donald Trump at his Tulsa rally over the weekend. Video: Reuters 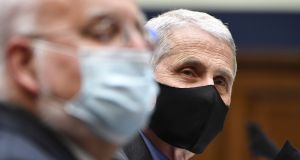 Leading coronavirus expert Dr Anthony Fauci has warned of a “disturbing surge” of Covid cases in some parts of the United States, and said the next few weeks will be critical in containing transmission of the virus.

Testifying before Congress, the director of the National Institute of Allergy and Infectious Diseases said that while there was a fall in Covid-19 cases in some parts of the country, such as New York, other states were seeing a rise in infection rates reflecting “an increase in community spread”.

“The next couple of weeks are going to be critical in our ability to address those surges we are seeing in Florida, Texas, Arizona and other states,” Dr Fauci said.

The United States has the highest number of coronavirus cases in the world, and more than two dozen states – particularly in the south – reported more new cases last week than the previous week.

Under questioning by lawmakers, Dr Fauci said he had never been told to slow down on testing, apparently contradicting a comment by President Donald Trump at the weekend.

Dr Fauci also expressed confidence that a vaccine could be available by the start of next year. “I think there is a reasonably good chance that by the beginning of 2021 that, if we are going to have a vaccine, we will have it by then, “ he said.

Mr Trump sparked controversy during a campaign rally in Tulsa, Oklahoma on Saturday when he said he had asked aides to slow down testing, because more testing leads to higher infection case numbers.

But asked on Tuesday as he left Washington for Arizona if he had been joking, Mr Trump replied: “I don’t kid . . . by having more tests, we find more cases. We did 25-plus, 25 million tests. Think of that: 25 million. If you look at other countries, they did 1 million, 2 million, 3 million . . . Other countries do very little by comparison.”

He also pointed out that some individuals who have tested positive are not sick, while some are young, describing testing as a “double-edged sword”.

More than 2.3 million cases have now been recorded in the United States, while more than 122,000 people have died from the virus. The pandemic has shut down broad swathes of US society and the economy, but several states have been reopening businesses as the US reels from record unemployment figures.

Also testifying alongside Dr Fauci was Robert Redfield, director of the Centers for Disease Control and Prevention (CDC).

Mr Redfield described the pandemic as “the greatest public health crisis our nation and world have confronted in a century”. He also stressed the importance of members of the public getting flu shots later in the year, as a surge in cases could coincide with flu season.