Coronavirus: Ireland plans ‘air bridges’ with countries where Covid-19 is under control 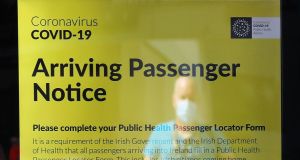 Regulations requiring those arriving in Ireland to tell the authorities where they will self-isolate are in place until July 9th. Photograph: Brian Lawless/PA Wire

Restrictions are likely to be eased only for those arriving into Ireland from countries which have brought coronavirus under control, despite a State-appointed taskforce calling for the existing two-week quarantine requirement to be dropped completely.

Government sources said Ministers were likely to stick with plans for so-called “air bridges” between Ireland and other countries which have brought the virus under control, with the issue potentially being discussed by Cabinet in the coming days.

The State-appointed Taskforce for Aviation Recovery on Tuesday called for the current requirement for those arriving into the State to be quarantined for 14 days to be dropped completely.

An interim report from the group called for the quarantine to be dropped by July 1st, adding: “A 14-day quarantine period makes non-essential and discretionary travel challenging, and inhibits business-related travel, which is critical for the Irish economy.

“The taskforce notes that implementation of efficient test and trace regimes can provide effective alternatives to the current 14-day quarantine measure.”

Despite this, well-placed sources said any easing would apply only to travel from other countries where Covid-19 had been controlled. And Taoiseach Leo Varadkar told RTÉ’s Prime Time on Tuesday night that Ireland needed to be very “careful and cautious” and the country would likely be “paired” with other countries which have tackled the virus.

Mr Varadkar has said the issue would be discussed by a Cabinet committee this week, with other sources suggesting it may also be discussed by the full Cabinet on Thursday, which could be the last such meeting of the Fine Gael-Independent minority administration.

While the taskforce argues that the Republic should lift travel restrictions “ideally” by July 1st, well-placed sources say no date has yet been decided for the easing of restrictions, with one figure saying changes could be made “potentially some time in July”.

Two weeks ago, the Cabinet considered proposals to lift such restrictions to other EU states as early as the end of this month but did not take a decision. Ministers are due to return to the issue this week.

Regulations that require those arriving in Ireland to tell the authorities where they will self-isolate are in place until July 9th, with some sources suggesting they will be in force for even longer.

The taskforce admits the Republic is “significantly behind” other EU member states in lifting Covid-19 travel restrictions, despite being as or more successful in containing the pandemic.

Meanwhile, all schools will be required to have designated isolation areas for any staff or pupils with symptoms of Covid-19, according to new official guidance.

In addition, all teachers and special needs assistants (SNAs) will be required to undergo Covid-19 induction training prior to returning to the classroom.

Staff will not be required to wear personal protective equipment with the exception of circumstances such as providing first aid or dealing with suspected Covid-19 cases.

However, masks should be provided to any staff member or pupil who has symptoms of the virus.

A department spokesman said these details were still being finalised in conjunction with public health officials and were due to be published later this week.

Minister for Education Joe McHugh has said his preference is for schools to reopen fully with no requirement for physical distancing between pupils on the basis that many would not be able to return to school otherwise.