‘Are you seriously spending your time on this stuff?’ - Varadkar quizzed on spin unit 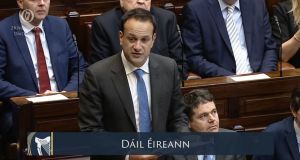 “This is political,” she told the Dáil, as Opposition parties renewed their attacks on the controversial unit.

Mr Varadkar said the “Government of Ireland” identity had replaced the logos of 17 departments and State agencies on the cover of a winter-ready booklet. This showed the public they were all working together, he said.

Ms Burton asked the Taoiseach: “Are you seriously spending your time on this stuff?”.

She also said the simplest and most required communications needed from the Taoiseach and Government was to answer questions properly, as she referred to the failure to answer parliamentary questions on the Garda whistle-blower controversy.

But Mr Varadkar said “the unit does not have a role in answering parliamentary questions, in dispensing political advice and obviously had no role whatsoever in the political controversy in the past few days”.

The Taoiseach also took issue on Tuesday with Ms Burton’s claim that he had been “heavily in favour of a general election” until a couple of days ago.

“I have never favoured an early election and certainly not an election before Christmas,” he insisted.

“I can guarantee everyone in the House that the events of the past week or two were not in any plan I had or anything I ever imagined happening.”

He added: “I know I am ascribed all sorts of motivations and levels of genius but I can assure the House and guarantee that the events of the past 10 day were never part of any plan to have an election or to have it early.”

The strategic communications unit had “no role whatsoever” in the political controversy of the past few days, he said.

“That is simply not its remit,” he told the Dáil as he faced fresh Opposition claims of “party politicisation” of Government communications and concerns that the unit would be about “promoting individual Ministers and a broader party political message, rather than the provision of basic information”.

Mr Varadkar said the € 5 million for the unit, announced in the Budget, was from existing resources for 2018 within his Department.

“No moneys have been sought from other Departments to fund the unit,” he said.

The unit would be working on a number of campaigns including the 10-year capital plan; a programme related to Brexit and its consequences; the National Children’s Hospital; the Health Ireland campaign and the Creative Ireland campaign.

The campaign will include advertising “across all media platforms, both traditional and digital”.

He said the unit recently tweeted about a general election in 2018. “What the business of the communications unit has to do with politics and elections is beyond me, but it gives us a small sense of the dangers that can unfold when something like this is developed.”