Parties preparing for election within a couple of months 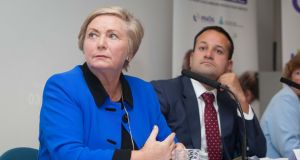 The minority Government has emerged intact from the most serious crisis since it was put together 18 months ago, but the confidence and supply agreement between Fine Gael and Fianna Fáil which underpins it has been stretched to breaking point.

In the wake of the resignation of the tánaiste yesterday, Taoiseach Leo Varadkar and the Fianna Fáil leader Micheál Martin were at pains to stress in the Dáil the agreement would continue.

The resignation he sought having been recently announced, Martin sought to soothe matters, assuring the Taoiseach, “We will continue to facilitate the workings of government in the coming months and beyond in line with the confidence and supply agreement to ensure the country will have the necessary stability to meet the very fundamental challenges that are facing the nation.”

It is clear that faced with either a resignation or an election, there was only one choice

Striking a rueful and humble note, Varadkar acknowledged the good faith of Martin and of Fianna Fáil during the controversy.

The tánaiste, Government spokespeople stressed, resigned of her own accord, without pressure from the Taoiseach. Though that is hardly the full story. Whether the Taoiseach had to lay out the facts of life or not, it is clear that faced with either a resignation or an election, there was only one choice.

Faced with the cliff edge of a general election being called this week, they pulled back. But there’s no doubt that the events of the past week have been profoundly damaging for the relationship between the two largest parties. And because of that, the Fitzgerald controversy will almost certainly shorten the life of the Government.

Both parties have begun preparations for the next election in recent months. Fianna Fail began the process in the spring – after Enda Kenny signalled his departure – and Leo Varadkar began putting preparations in place soon after his election as Taoiseach.

But these processes were suddenly accelerated in recent days. And though the prospect of an immediate election has receded, the preparations will not cease. They will continue at a clip in January, and both parties will be prepared – if not 100 per cent ready – to fight an election within a couple of months.

Leo Varadkar received two messages from TDs and Ministers returning from their constituencies after the weekend: one was that people didn’t want an election and the second was that the organisation was not yet ready for one. But by the time the next crisis comes around, they’ll be ready.

For Fianna Fáil, recent days has given them their first up-close look at the Taoiseach in a pressure situation. Senior party figures have not found the experience intimidating. Fianna Fáil has been trying to figure Varadkar out since his election. Now they feel that they know more about him. Those that were a bit scared of his potential electoral appeal are less so now.

Varadkar, for his part, can be expected to learn from the mistakes of the past week. Losing a minister – whether you have to sack them or whether they walk the plank of their own volition – is something that all taoisigh find very hard to do. But taking difficult decisions is an important part of the job. So is taking responsibility for things outside the Taoiseach’s direct control. If Varadkar knew that before anyway, he understands what it feels like now.

There are both short-term and delayed effects of a controversy such as we have just witnessed.

In the immediate aftermath, as the threat of a Christmas election recedes, a sort of giddy sense of relief enveloped Leinster House. Everyone, Fine Gaelers included, were glad an election had been avoided.

In the longer term, though, the fact that Fianna Fáil claimed the head of the tánaiste will be remembered by Fine Gael. The Taoiseach had to climb down and Fianna Fail got its way. That will scratch Fine Gael like sandpaper.

The rivalry between the two big parties – separated by history and culture more than policy – has always dominated Irish politics. It continues today, even in a changed political landscape. The relationship is different. But the rivalry remains.