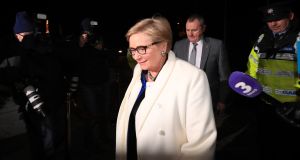 Radical changes to the “dysfunctional” Department of Justice were promised by the Taoiseach Leo Varadkar yesterday, as he announced the resignation of the tánaiste, Frances Fitzgerald, to the Dáil, ending a political crisis that had threatened a snap general election before Christmas.

After a dramatic night and morning at Leinster House, Ms Fitzgerald bowed to the inevitable and tendered her resignation to save the Government from defeat to a Fianna Fáil no confidence motion which was only hours away from the floor of the Dáil.

Her resignation had been sought by Fianna Fáil following revelations of emails which showed she had been alerted to an aggressive Garda legal strategy aimed at the Garda whistleblower Sgt Maurice McCabe during the 2015 hearings of the O’Higgins commission. The commission was examining Sgt McCabe’s allegations of Garda malpractice.

Ms Fitzgerald’s resignation was announced to the Cabinet late on Tuesday morning, after meetings between herself and the Taoiseach on Monday night and again the following morning.

Ms Fitzgerald confirmed her decision to stand aside from her role at yesterday’s Cabinet meeting, insisting she was doing so in the “national interest”.

Ms Fitzgerald told her Cabinet colleagues she did not believe she had done anything wrong and insisted she would be vindicated by the disclosures tribunal, which is investigating the alleged smear campaign against Sgt McCabe.

Mr Varadkar told the meeting he felt it was “wrong” Ms Fitzgerald was standing aside, while Minister for Health Simon Harris and Minister for Foreign Affairs Simon Coveney insisted she had not been afforded due process.

As speculation grew that her departure was imminent, the Independent Alliance also told the Taoiseach before the Cabinet meeting it could not support her continued presence in the Government.

In the Dáil soon afterwards, the Taoiseach paid tribute to the tánaiste and said that she had been forced to resign by a “feeding frenzy” which had denied her “a fair hearing based on the full facts”.

Mr Varadkar laid much of the blame for Ms Fitzgerald’s exit on the Department of Justice, and announced an external inquiry into the affair and “radical action to restore public confidence”.

All parliamentary questions on the subject of Maurice McCabe are now to be reviewed and officials within the department will be made available to TDs to answer any outstanding questions.

A few hours after the Taoiseach’s statement to the Dáil, the secretary general of the Department of Justice, Noel Waters, resigned with immediate effect. He had previously announced his intention to retire next February.

In a letter to staff, Mr Waters said the department had been subjected to “a barrage of unwarranted criticism” and faced a series of claims, which, he insisted, would be proven to be untrue.

Changes to the Government’s ministerial ranks caused by Ms Fitzgerald’s resignation as minister for business and tánaiste are expected in the coming days.

Well placed sources suggested Ms Fitzgerald’s business portfolio will be filled by an existing Cabinet member. A backbencher or junior minister could then be elevated to the vacant Cabinet slot. Among those being linked with a move to Ms Fitzgerald’s old department is Heather Humphreys, the current Minister for Culture Heritage and the Gaeltacht.

Sources also said Mr Varadkar’s previous rule that first-time TDs should not get ministerial positions may no longer apply, raising the prospect of a backbencher being appointed to Cabinet or given a junior ministerial job.

Josepha Madigan, the TD for Dublin Rathdown, was a strong supporter of Mr Varadkar during the Fine Gael leadership race and is being mentioned within Leinster House for possible Cabinet appointment. Helen McEntee, the Minister for European Affairs, and Galway West TD Hildegarde Naughton are also mentioned.

Those tipped to take over from Ms Fitzgerald as tánaiste include Mr Coveney and Ms Humphreys, with one source saying the new tánaiste will come from outside Dublin.

Mr Varadkar is due to face a parliamentary party meeting on Wednesday night where it is expected members will express their frustration at the way events have unfolded.

One senior figure said Mr Varadkar “had hung many of us out to dry” by encouraging them to publicly defend Ms Fitzgerald, without knowledge of the full extent of the problem.