Frances Fitzgerald secures nomination to run in next election 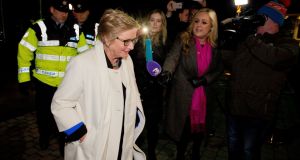 Former tánaiste Frances Fitzgerald secured a nomination to run in the next general election at her constituency selection convention on Tuesday night, just hours after resigning from her position.

Speaking at the event at the Finnstown Castle Hotel in Lucan, Ms Fitzgerald told her local party members they had to show the country they had confidence in her and in Fine Gael.

At the convention, she was nominated to run alongside Councillor Emer Higgins. Two other nominees, Vicki Casserly and William Lavelle, both councillors, dropped out.

“I want to continue to work with local groups and residents on important local issues,” the former tánaiste said.

“The job is unfinished. We still have to keep the economy going and make sure that the fruits of the economy spread to everyone right across this constituency and across the country. And I believe that that is what Leo Varadkar and the Fine Gael Government can do.

“That is why it is really important that we are having this convention tonight, that you are all here and that we get out there and do the work on the ground that is necessary.

“I believe that Fine Gael always leaves the country in a better place than where we find it. We are always looking at the problems that a previous government has created and we have seen Fine Gael rescue the country so many times.

Her colleagues at the convention, where Fine Gael’s candidates for the Dublin Mid West constituency were decided, expressed disappointment in her decision to resign and unwavering support for her political future.

Just to confirm Dublin Mid-West @FineGael Selection Convention is still going ahead this evening in @FinnstownDublin and I will be putting my name forward for Selection. Looking forward to meeting local members.

Ms Fitzgerald also spoke of how it had been the greatest honour of her life to serve in Government, “but I do believe that my resignation was necessary to avoid what we all know would’ve been an unwelcome and potentially destabilising general election. What I said to the Taoiseach this morning when I met him is it’s historically, a critical time for Ireland with Brexit and the challenges coming up ahead.

“I have to say, it has been very tough being at the centre of this political storm, not something I’m used to, not something too many people are used to.

“It’s also been very hard to get facts on the table and I want to say that to you, amid the very frenzied political media atmosphere throughout my career, I’ve always wanted to act with integrity and responsibility and that’s why I decided on this occasion that I would put the national interest ahead of my personal reputation. I’ve always believed in fairness and equality, it’s been a driving principle for me.”

She thanked the Taoiseach Leo Varadkar for his loyalty and support. “I’ll always be grateful to him for giving me the opportunity to serve and as he said this morning, he wants me to continue to play a full role in political and public life at the highest level – and that’s what I want to do. I want to vindicate my good name as well of course.”

Earlier, Ms Fitzgerald had tweeted: “Just to confirm Dublin Mid-West Selection Convention is still going ahead this evening in Finnstown Dublin and I will be putting my name forward to selection. Looking forward to meeting local members.”

The tweet attracted some negative reaction, with remarks including “shame on you” and “brass neck”, but it was simultaneously met with messages of support, defending her political record.

Gerry Kennedy, acting chair of the constituency committee, said before the selection process got under way that the evening would not be a “trial” for Ms Fitzgerald or the events that had preceded her resignation.

Nor, he said, was it about asking her “to justify her actions in relation to any of the issues that are well aired at this point in time”.

Emer Currie, daughter of former Fine Gael TD Austin Currie, said she was disappointed Ms Fitzgerald had resigned. “She is a great politician for the area and we hate to see her going through this,” she said. “She is a woman of great integrity and she works very hard.”

As with others entering the convention, Ms Currie said she believed it was an indication of a future in politics for the former minister. “I think we need more women like Frances in politics.”

Another party member, Stan Kelly, said the move had probably come as a surprise in the constituency.

“She was left holding a bit of a can,” he said, adding that the convention was a demonstration of “business as usual”.

Minister for Finance Paschal Donohoe made an appearance at the convention in support of the former tánaiste.

He said it was a day that reminded people that politics was not a job but a vocation.

“Rarely has a person of such quality and of such character as Frances been tested in the way she has been tested,” he said.

“In an age in which a crisis seems to be permanent, in which the demands are always so great, and where those that we deal with measure themselves by how hard they can shout or how biting their words are, we know that is not the voice of the representation that our great country needs.”