Frances Fitzgerald failed to meet high standards she set for herself 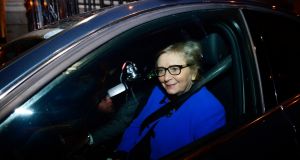 Frances Fitzgerald showed little emotion as she announced her resignation as Tánaiste and Minister for Business, Enterprise and Innovation yesterday.

Addressing her Cabinet colleagues at their weekly meeting, Ms Fitzgerald insisted she had done nothing wrong but would stand aside from her position.

It was a decision she had taken of her own volition and was doing so in the national interest to avoid a general election, the Tánaiste said.

Ms Fitzgerald had faced intense political pressure to resign from her role as deputy leader of the Government for more than a week.

The controversy focused on her knowledge of efforts by the former Garda commissioner Nóirín O’Sullivan to question the integrity and the credibility of a Garda whistleblower Sergeant Maurice McCabe.

Such questions first emerged in May 2016 when leaked transcripts of the O’Higgins commission – which examined allegations of Garda malpractice in Cavan-Monaghan division – were published in the Irish Examiner.

They showed Ms O’Sullivan had instructed her legal team to raise questions about Mr McCabe’s motivation for raising concerns about Garda malpractice.

Ms Fitzgerald faced a barrage of questions about her knowledge of the strategy but insisted she was unaware of the matter and that it was for the O’Higgins commission.

She went on to repeatedly praise Sgt McCabe, while at the same time expressing her full support for the former commissioner.

However a year later, it has now become clear that the Tánaiste was kept fully abreast of the aggressive approach taken by Ms O’Sullivan during that inquiry.

It emerged last week she had received an email on May 15th, 2015 advising her of the former commissioner’s attempt to introduce a serious criminal charge against Sgt McCabe at O’Higgins.

The correspondence confirmed the criminal complaint had been investigated and the Director of Public Prosecutions had determined there was no basis for action.

It also advised the Tánaiste she had no function in this regard insisting this was a matter for the O’Higgins commission of investigation.

It was the emergence of this email that led to Fianna Fáil and Sinn Féin tabling motions of no confidence in Ms Fitzgerald. Throughout, Taoiseach Leo Varadkar stressed his full support for the Tánaiste.

In spite of everything that emerged, the Taoiseach insisted she had done nothing wrong and he would not seek her head on a plate.

His unwavering support led many to believe Ms Fitzgerald was untouchable. Her Fine Gael colleagues were not so sure. Many predicted her demise early last week, some were gleeful at the prospect.

However as Fianna Fáil tabled its motion of confidence, the party rallied around her. Not by choice but by necessity.

It then became more about Mr Varadkar’s retention of office and less about Ms Fitzgerald. The parliamentary party passed a motion of confidence in the Tánaiste on Thursday night.

Ministers battled the airwaves throughout the weekend, confident the party was on the right side of the argument and assured it could win the next election on this basis.

But Monday night saw the emergence of new documents and two further emails sent to Ms Fitzgerald in July 2015 informing her of the aggressive approach taken by the former commissioner at the O’Higgins commission.

Worse still, it confirmed the Department of Justice and the former commissioner worked together to formulate a response to any media queries on the subject.

It was “game over” for the Tánaiste then, to quote one of her colleagues. Ministers began to turn their back on her, while the parliamentary party heaped pressure on her to stand aside.

Ms Fitzgerald is a fine politician and a remarkable woman. Her legacy on social issues and legislative matters will speak for itself. However on this issue, Ms Fitzgerald failed to meet the very high standards she set for herself. It may be easy to get lost in this dispute and even easier to believe this is just about an email.

In fact, this is about the system trying to break down a man who tried to raise his head above the parapet.

The emails released in the past few days show Ms Fitzgerald was fully aware of the strategy used against Sgt McCabe. It showed she did nothing to stop it and worse again, denied the existence of it for a year.

Ms Fitzgerald will stand to fight the next general election in the Dublin Mid-West constituency but her political career is all but over.