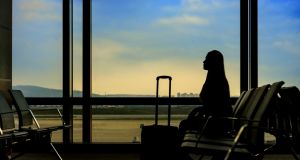 Dr Peter Thompson will tell the Oireachtas committee debating the Eighth Amendment that more than 3,000 women a year travel from the Republic of Ireland to England or Wales for a termination of pregnancy. Photograph: Coloroftime/E+/Getty.

The Oireachtas committee debating the Eighth Amendment to the Constitution, which gives effect to the State’s abortion ban, will be strongly advised not to “make a list” of foetal abnormalities that might be permitted grounds for termination.

Dr Peter Thompson, a consultant in foetal medicine at Birmingham Women and Children’s Hospital, will appear before the committee on Wednesday.

In his opening statement, Dr Thompson will note that one of the issues faced by the committee is “the decision regarding which, if any, foetal abnormalities will be compliant with the new legislation for termination of pregnancy”.

“With regard to this I would urge you not to make a list, as with the ever changing progress in medicine, conditions would need to be added and removed from the list on a regular basis,” his opening statement says.

He will “strongly advise” the committee against “being prescriptive and using the term lethal abnormality”.

“The problem is there is no agreed definition as to what lethal actually means, is it that all foetuses with that condition die before birth, that they die either before birth or in the neonatal period despite supportive therapy, a baby that usually dies in one of these two periods of time or is it that it has been noted that there is an association between the condition and death.”

Dr Thompson will outline research with the most common conditions which have been said in medical literature to be lethal foetal malformations, along with survival rates for these conditions.

He will note that, since the 2012 research was published, survival until 13 months has been reported in a case of a condition known as renal agenesis, where one or both kidneys do not develop.

“Therefore counselling women whose pregnancy is complicated by a foetus with a severe abnormality is not a binary state of affairs but rather a complex discussion that requires a description of risk and probability,” Dr Thompson will state.

Of these terminations, just 33 were performed after 20 weeks gestation.

This is where there is substantial risk that if the child were born it would suffer from such physical or mental abnormalities as to be seriously disabled. Termination of pregnancy in England and Wales is presented as one of the options available to women if their foetus is at substantial risk of significant disability.

Dr Thompson will note that Parliament there “has not defined either substantial or significant but have purposefully left it to the medical profession to make these decisions in good faith”.

It began hearings in September and is expected to publish its report next month.