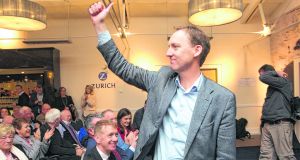 The seat of Fianna Fáil MEP for Dublin Barry Andrews is in ‘cold storage’ pending the UK’s withdrawal from the European Union. Photograph: Gareth Chaney/Collins.

The Alliance Party has welcomed a proposal that the three Northern Ireland MEPs, who will lose their seats once the United Kingdom leaves the European Union, should be granted observer status at the European Parliament to protect the North’s interests.

Seventy-three UK MEPs will lose their seats once the withdrawal agreement is passed by Westminster and the European Parliament, but only 27 successors will be appointed, including two from Ireland, in order to leave room for MEPs from any states that join the EU in future.

Sinn Féin will still have representation in the parliament through Midlands North-West MEP Matt Carthy, but the DUP and Alliance will not.

Mr Andrews, who takes up his Dublin constituency seat along with Ireland South MEP-elect Deirdre Clune once the UK leaves, said outgoing MEPs would no longer have voting rights but could continue to attend, and liaise, with the parliament and represent Northern Ireland’s interests given the likely impact of Brexit.

There is no such position as an observer status MEP and in official circles it is viewed as legally impossible since new members have no position, pay or legal status until the UK leaves and they take up their seats.

The DUP did not responded to a request for comment while the Alliance said it could “see the logic in the proposal, given Northern Ireland will remain subject to many of the regulations emerging from the EU”.

What are cold-storage MEPs doing?

However, a spokesman for the Minister for Foreign Affairs said “the well established and proven structures of the Good Friday agreement give the people of Northern Ireland a strong democratic voice on all issues through the Stormont Assembly.

“Our overwhelming priority now is to get that Assembly and Executive up and running so that Northern Ireland can make its voice heard on the next phase of Brexit.”

Mr Andrews said he was relieved that taking his seat was a step closer with Boris Johnson having won a House of Commons majority and intending to press on with ratifying the withdrawal agreement. But he said the UK leaving would not be good for anyone else.

Mr Andrews is a former director general of the Institute of International and European Affairs in Dublin. He took a leave of absence for the European elections in May and has not worked since the election.

“I’ve been minding the children who are seven, 12 and 14, which has been great. But on the professional side it has been frustrating,” he said. “I expect I will get an email on February 1st from the European Parliament.”

Ms Clune, who is waiting to begin a second term as an MEP, said she will be relieved to take up her position. She said she had been keeping up to date with the parliament and ongoing issues.