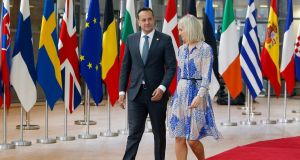 Taoiseach Leo Varadkar has said he hopes the result of the UK general election is “decisive” with a clear parliamentary majority for either Conservative leader Boris Johnson or for a coalition of parties in favour of holding a second Brexit referendum.

With most polls suggesting the likely outcome is either a Conservative majority or a hung parliament, Mr Varadkar told reporters that he hoped someone would have a parliamentary majority.

“Obviously it’s entirely a matter for the people to the United Kingdom to elect who they want. I just hope the result is decisive, so we know where we’re going over the next few months,” Mr Varadkar told reporters in Brussels, where he is attending a summit of EU leaders.

While the summit will focus on climate change and the next EU budget, Thursday’s UK general election is hanging over the gathering.

“Most of us, most prime ministers and presidents, will be staying up late tonight to watch the results come in,” the Taoiseach acknowledged.

Mr Varadkar did not agree that the choice was between a hung parliament and a victory for Mr Johnson.

“I don’t think the parties looking for a second referendum t want a hung parliament either. They would like to have a majority as well,” he said. “I think the best thing for Ireland, for the UK, for Europe, would be to have an end to the uncertainty — so whether that’s prime minister Johnson winning with a large majority or the remain parties together winning a majority, we’ll work with whatever the outcome is. But what’s been very hard to work with is a parliament that wasn’t able to come a majority decision on anything, and I just hope we’re not in that position again tomorrow.”

Mr Varadkar said the talks on a post-Brexit trade deal between the EU and UK — which will begin if Mr Johnson wins a majority and gets the withdrawal agreement approved in parliament by the end of January — would be “crucial for Ireland”.

He said the withdrawal agreement, he said, makes sure that there will be no hard border, guarantees citizens rights and protects the common travel area “but it doesn’t solve the issue of trade”.

“And the trading relationship between Ireland and Britain is essential for the agrifood sector, for our exporters, for small businesses. So it’s going to be crucial for Ireland that we get a good deal on trade with the UK.”