Pensioners tired and frustrated with ‘boring election’ and European ‘skullduggery’ 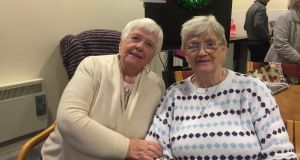 Hannah O’Connor (83) said she voted in the election with a ‘heavy heart’ while Labour voter Bridie Madigan (R) is a fan of Boris Johnson.

Politics and religion are usually off-limits at the Southwark Irish Pensioners Project, but an exception was made on the afternoon of Boris Johnson’s landslide victory that saw the Conservatives celebrate an 80-seat majority.

Although based in a strong Labour constituency in South London – Labour MP Neil Coyle was re-elected with 54.1 per cent of the vote – many attending the centre’s weekly card game welcomed a majority Conservative parliament as a means to unblock the interminable Brexit impasse.

Having lived in London for 62 years, Bridie Madigan from Connemara, Co Galway, has always voted for the Labour party but is not, by any stretch, a Corbyn fan.

“I do like Boris, I have to say. He will hurry Brexit up anyway,” she said, adding that “anything is better than Corbyn”.

A Leave voter in the 2016 EU referendum, Ms Madigan is pleased politics and conversations might be able to move past the deadlock.

“It doesn’t bother me whatever the hell they do with it so long as they just stop talking about it. I mean three years goodness sake. At least now we should get this stupid Brexit out of the way,” she said.

Although Ms Madigan was keen to ‘Get Brexit Done’, she admitted she stuck to what she knew on Thursday and voted for the Labour candidate.

Not fancying any political option, Hannah O’Connor (83) said she voted in the General Election with a “heavy heart”.

“I don’t trust any of them. Boris isn’t trustworthy, but then Corbyn should have gone a long time ago,” she said as she rummaged for the coffee jar.

“I couldn’t bear to watch the results. Once I saw the exit poll I thought ‘That’s it, I’m off to bed’. It was a very boring election really,” she added.

Originally from Listowel, Co Kerry, Ms O’Connor moved to London around 60 years ago in search of work. She recalled voting for Britain to enter Europe in 1975 and voting again for the country to stay in the 2016 referendum.

Ms O’Connor was not at all convinced by the Prime Minister’s promises of a quick exit, believing another decade will pass before the withdrawal process is completed.

She went on: “To be fair to Boris he got all the photo opportunities he needed and I am sure a lot of people are pleased with the result.”

Cradling a mug of milky tea, Belfast-born Henry John (who didn’t want to give his surname) said he refuses to vote as “all politicians are the same”.

However, he broke his lifelong abstentionist policy to participate in the Brexit referendum as he saw an opportunity for Britain to break away from European “skullduggery”.

The 78-year-old said he now wants politicians to do their jobs and get on with leaving the EU.

“I’m not a serious political animal; I’m just not that interested in it. All I know is they asked us to vote to stay or come out and we voted to come out.”

An outreach worker at the Southwark centre, Peter Gill (53) said Brexit hangs like a “dark cloud” over the country.

Mr Gill’s clients – mostly vulnerable pensioners – worry about day-to-day struggles, such as where they will get their next meal from or whether the curtains in their homeless shelter have arrived. For them, Brexit is a side-issue that rarely surfaces in conversation, he said.

‘Fed up with Brexit’

However, the Tipperary man, who voted to remain in the EU, said he is personally “fed up with Brexit” and happy to see it come to some sort of conclusion.

“I don’t even look at the news anymore because there is never a day where it is not mentioned. The whole thing has just created so much uncertainty, and that can be quite depressing when it goes on and on,” he said.

Despite Boris Johnson’s repeated insistence that Brexit is “oven-ready”, Mr Gill is aware the withdrawal process is far from over. However, he is relieved that cliff-edge, “do or die” moments and missed Brexit deadlines are likely a thing of the past.

“Personally I would have preferred we stay in the EU as we knew what we were dealing with, but hopefully something good can come out of this now and we can start rebuilding.”