TD told to ‘stop your nonsense and stick to the facts’ 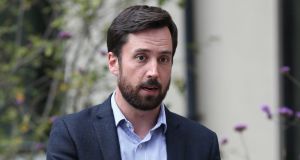 Minister for Housing Eoghan Murphy has dismissed allegations that he was engaging in ‘spin worthy of Boris Johnson’. Photograph: Crispin Rodwell

Minister for Housing Eoghan Murphy has dismissed allegations that he was engaging in “spin worthy of Boris Johnson” after he told the Dáil the target of 10,000 social homes this year includes houses leased from private landlords.

Rise TD Paul Murphy made the accusation when the Minister said the build target for 2019 is to deliver 6,545 homes, an increase of more than 30 per cent on last year’s target.

“In addition to the homes being built this year, more than 3,400 additional social homes are to be delivered through acquisition and leasing schemes,” the Minister added.

During housing questions in the Dáil, there were sharp exchanges as Mr Murphy claimed the Minister is “playing with figures and the definition of social housing to create confusion”.

But the Minister in turn rounded on the Rise TD and told him to “stop your nonsense and stick to the facts”.

He said “I am not playing with figures and there is no grand conspiracy here.” He insisted that “if those figures were made up, there would be a grand conspiracy involving every local authority, housing body and Department”.

The opposition TD said that about, 2,130 homes of the 10,000 are to be leased from private developers.

“They will be owned by private individuals, rented from the State and then rented out to people on social housing waiting lists. That does not amount to social housing,” he claimed.

The strategy would also fail if there was a difficulty in a local authority area “for whatever reason”.

He told Mr Murphy to “stop telling his untruths, stop spinning and get his ideology out of the way because these are real homes for people coming off the housing lists and that is what matters, not his ideology”.