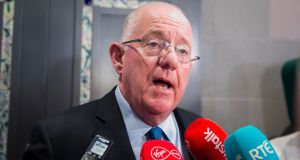 Garda protective services units to provide professional and expert assistance to victims of domestic violence will be in place in every policing division by the end of March next year, the Dáil has been told.

Mr Flanagan said the figures were stark, shocking and disturbing. “Each one of those calls is made by someone who is experiencing a deeply traumatic incident, reaching out for help at a time of crisis.”

The Minister highlighted legislation implemented by Government including making coercive control a criminal offence. He said more than 2,700 frontline gardaí had to date received training in how to identify and investigate this offence.

He said the new protective service units would ensure that when victims of domestic and sexual violence “present to gardaí - at perhaps their most vulnerable moment - they are met with professional and expert assistance”.

The figures released by the Garda Commissioner in a speech on the trauma of domestic abuse, were repeatedly referred to throughout the debate including the revelation that domestic homicides have outpaced gangland murders by almost two to one in the last three years but still generate far less coverage and discussion. The 30,000 calls about domestic abuse were about 500 to 600 a week.

TDs repeatedly highlighted that one in four women suffer domestic abuse and 126 women have been killed in the last 32 years by a current or former partner.

In an impassioned contribution Fianna Fáil TD Fiona O’Loughlin said “we could talk endlessly about statistics and figures which are stark, bleak and disturbing.

“We should be disturbed because we, as a society, need to be shaken out of our appalling apathy in relation to the services provided to these women and children.”

Ms O’Loughlin said the Government had to be called out on its failure to fully implement the Istanbul Convention on preventing and combating violence against women and domestic violence.

She called on the Government to finally act to build the long promised family law court in Smithfield with new facilities and services.

She criticised the Government for “its failure to build, create and maintain refuge places and its failure to support these women through the court system”.

The Kildare TD said “we must imagine what it is like to be drowning in a life of fear, to never be able to relax in your own home, to never know what is coming next, whether it will be an assault or an attack an an attack on your children, or for those children to witness an attack on oneself”.

She asked: “What does a woman do when she have walked out of her home, away from her abuser, sought refuge and been denied it because of the failures of the Fine Gael Government, the abject, callous inaction of an inept administration? The only place that woman can go is back to that house and abuser.”

Sinn Féin TD Mark Ward highlight the “blunt” message of national agency Safe Ireland that to the Government that “promises and recycled budgets will not respond to the needs of women and children living with domestic abuse and coercive control”.

He added that “Safe Ireland’s data tells us that nine requests for refuge accommodation went unmet every day last year because services will full. That is 3,256 victims of domestic abuse or violence who, having got themselves to the point of asking for help, were unable to secure safe accommodation and support when they needed it most.”