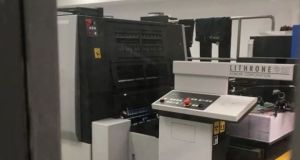 The Komori printer purchased for the Houses of the Oireachtas was too big for its designated room so remedial works had to take place. Photograph: RTÉ News.

The Clerk of Dáil Éireann has said there was a sound business case for the purchase of an €850,000 printer that would not fit into the room where it was intended to be housed.

Peter Finnegan told the Public Accounts Committee (Pac) that the failure of officials to spot measurement problems, flagged in advance, was a “major blind spot” but that the purchase made financial sense.

During an exchange with Sinn Féin TD Imelda Munster, over what she referred to as a “spending spree”, Mr Finnegan pointed out that the structural costs involved in installing the previous printer in 2004 were twice those in the recent case.

“When we have a piece of major equipment installation it invariably involves structural works,” he said. “We are not an organisation that has the luxury of installing equipment in a green field site. We are not Google down on the docks. We are an organisation that functions from Dublin 2 in very, very cramped conditions and invariably costs arise as a result of that.”

He said that even though mistakes were made, the investment was more cost effective than outsourcing printing services, which was the “most expensive option of all”.

During his opening remarks Mr Finnegan explained that the 12-year-old printers were becoming increasingly unreliable and costing €65,000 a year in maintenance and parts. Those costs, together with a necessary overhaul of the old system over a five year period, he said, would have amounted to some €500,000.

Deputy Munster said she was “amazed” by the argument of a “sound” business case, but Mr Finnegan insisted that it was difficult to argue that “the replacement of a printing press at €850,000 with additional costs for adaptations is not a better option than continuing with 12-year-old machinery”.

On reflection, he said the absence of an architect in the decision making process was the stand-out mistake.

Mr Finnegan also said he is pursuing a financial contribution from the company that provided a printer following the controversy over the cost overruns linked to the size of the machine.

Mr Finnegan said manufacturer Komori could not be held liable given information it had provided on specifications during the tendering process.

“Would they be prepared on an ex-gratia basis to make some contribution or gesture to the Houses of the Oireachtas in respect of this machine? That is something that I am pursuing.”

Mr Finnegan was responding to a question from Fianna Fáil TD Shane Cassells regarding the possibility of an admission of liability from the company given they had made a site visit in advance of supplying the printer.

Fine Gael TD Kate O’Connell said the company “are not going to write you a cheque” but recommended the Oireachtas renegotiate the maintenance contract.

The supply of the 17 tonne printer has continued to provoke public and political controversy since it was first reported by The Irish Times. The cost of the move is now expected to run to more than €2 million.

Fianna Fáil TD Bobby Aylward said he agreed with the business case but that the controversy had captured the public imagination. He said this was probably due to previous spending issues around the National Children’s Hospital and the National Broadband Plan and the related public impression that politicians and civil servants were “playing with taxpayer’s money”.

1 Shane Ross: ‘I lost a friendship with Mattie McGrath completely. He got totally personal’
2 Storm Jorge: Power outages, fallen trees expected as ‘exremely strong wind’ to hit Ireland
3 Murder in a crowded house: The full story of the Patricia O’Connor trial
4 ‘We had spies there . . . I envy them.’ How the political world saw Sinn Féin’s meetings
5 Coronavirus outbreak: WHO raises risk warning to ‘very high’
Real news has value SUBSCRIBE