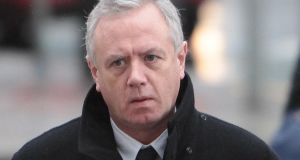 Eamonn Lillis: The anomaly in the current law was highlighted by the case of Lillis who was jailed for killing his wife, Celine Cawley. Photograph: Brenda Fitzsimons

The Government has published legislation which would make it impossible for murderers to inherit the property of their victims.

The proposed legislation clarifies the law around succession and will prevent a person convicted of murder inheriting a share of any estate, pension or life insurance policy belonging to the deceased.

The Bill applied to those convicted of murder, attempted murder and manslaughter but not to other offences leading to death, such as dangerous driving.

At present, under the Succession Act 1965, a person may not inherit any part of the estate of someone whom he or she has murdered, attempted to murder or killed by manslaughter.

However, an anomaly in the law arises in cases where the killer and victim share joint tenancy over a property. As the law stands, under the right of survivorship, a convicted killer is entitled to the full value of the property in such circumstances.

Under the proposed legislation someone convicted of murder or manslaughter would be entitled only to their share of the property, a value which would be determined by a court.

The proposals are contained in the Courts and Civil Law (Miscellaneous Provisions) Bill 2017 which is at the pre-legislative scrutiny stage. This will be followed by an initial Dáil debate.

The anomaly in the current law was highlighted by the case of Eamonn Lillis who was jailed for killing his wife, Celine Cawley, in 2008 at their family home in Howth, Co Dublin. He was convicted of the manslaughter in 2010 and was sentenced to six years and 11 months and was released in 2015.

In 2011, Ms Cawley’s family took legal action against Dwyer to prevent him from taking Ms Cawley’s portion of some of their shared property, on the basis that he should not benefit from his crime.

Ms Justice Mary Laffoy then ruled she could modify the right of survivorship rule. She found that the legal title to the jointly owned property vested in Lillis, but that he held Ms Cawley’s share on trust for her estate.

He was entitled to half of the jointly owned property, with the remainder to go to their daughter.

The case prompted Ms Justice Laffoy to comment that legislation was needed to clarify the right of survivorship in such cases.

The Law Reform Commission (LRC) later produced a report recommending legislation making it tougher for killers to inherit their victims’ property. Its recommendations are largely replicated in the new Bill.

In cases of murder, the guilty party will have no right to inherit any part of the deceased’s estate.

Parts of the estate which would otherwise have gone to the offender would be dealt with “as if the offender had died before the victim”, the Bill states.

However, in cases of manslaughter, a judge will have discretion in the application of the law. A court could fully or partially grant some of the estate to the offender depending on several factors including their age and financial needs.

A spokesman for the Minister for Justice Charlie Flanagan said yesterday that passage of the Bill was a priority.

“Minister Flanagan considers that reform of the law in this area is both urgent and necessary. For this reason, he is taking the first available opportunity to publish reform proposals based on earlier recommendations of the Law Reform Commission.”