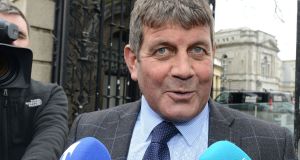 Andrew Doyle said: “We’re not going to be an organic island and I don’t think we should even try to.” Photograph: Dave Meehan

Ireland should work to have all-island status as GMO-free to maintain biodiversity, according to Minister of State for Agriculture Andrew Doyle.

The island, north and south, could be a “reservoir” of safe genetically modified organism-free (GMO) seed varieties in the event of an international food scare, he believes.

It is his personal view and contrary to that of Teagasc, the Agricultural and Food Development Authority, which takes the “follow the science” view, he admits.

“But I’m thinking of it from the island status point of view.”

He adds: “All I’m saying is, is it worth our while being recognised as an island that is a reservoir for seed in the event of some breakdown with a mainstream crop.”

Mr Doyle, who has responsibility for food, forestry and horticulture, said: “We’re not going to be an organic island and I don’t think we should even try to. Organic has its place but it is not mainstream.”

However, he believes that Ireland could be a seed bank for mainstream arable crops such as wheat, oats and barley. He said the State would have to work with Northern Ireland and it could be done through the Ministerial Council.

The point he stresses is that it would be easier for Ireland to “isolate and keep things clear when you’re not on a big land continent”.

“The wind can cross-contaminate. But on an island off the continent on the west coast of Europe where the prevailing wind is, not always but mainly south-westerly, it doesn’t tend to blow from any other land mass.”