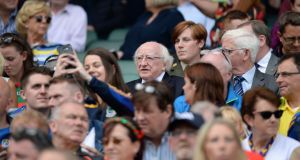 President Michael D Higgins at Croke Park on Monday. Frances Fitzgerald and Bertie Ahern are two names that have been linked to the presidency. Photograph: Dara Mac Dónaill

President Michael D Higgins should serve a second term without having to contest another election, according to the Minister for Justice, Charlie Flanagan.

Mr Flanagan was speaking in response to Independent Alliance Minister of State for Disability Finian McGrath, who has encouraged other candidates to seek a nomination to oppose Mr Higgins.

The President has indicated he is considering seeking a second term in office when his current one expires in October 2018. Mr Flanagan said Mr Higgins should attract cross-party support if he chooses to run again.

The Minister for Justice told The Irish Times: “I am speaking in a personal capacity because the Fine Gael parliamentary party hasn’t discussed this. However I would be strongly advocating a second term for President Higgins.

“As Minister for Foreign Affairs I worked closely with him, I have seen first hand the extraordinary work rate and the great contribution he has made to Ireland’s reputation on the world stage.

“He has done such an outstanding job that the position should be his if he wishes to be retained as President.”

Taoiseach Leo Varadkar has also offered Mr Higgins his support but insisted the decision on whether to contest was a matter for the President himself.

The Independent Alliance believes there should be an open race for the position and Mr McGrath has urged those considering to approach Independent TDs for support.

A presidential candidate needs the support of 20 members of the Dáil or Seanad to get on the ballot paper.

There are 23 Independents in the Dáil, and more in the Seanad. If an Independent candidate were to challenge Mr Higgins, other candidates from political parties would likely enter the contest.

Tánaiste Frances Fitzgerald and former taoiseach Bertie Ahern are two names that have been linked to the position.

Fianna Fáil Senator Ned O’Sullivan said Mr Higgins had been elected on the basis he would serve one term. Mr O’Sullivan claimed many of his colleagues within the party believe there should be a change in Áras an Uachtaráin.

He said: “I would welcome an early announcement from President Higgins after a good term and as a person who has always championed honesty and transparency that he is keeping to his word so that the contest can now begin in earnest.”

Government figures believe Mr Higgins will make his position known by early next year. Speaking in Co Galway last week, the President said: “What I can say is that the only change in the circumstances is that nothing is ruled out.”