Letters reissued as motorists fail to respond to conviction quashing

Of 9,380 letters sent to motorists affected by Garda error, 3,888 drivers failed to respond 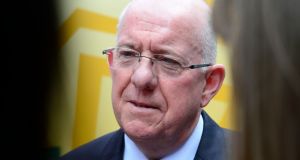 Minister for Justice Charlie Flanagan said 3,888 drivers failed to respond to letters notifying them about the action to be taken to overturn the wrongly imposed sanction. Photograph: Cyril Byrne

Almost 4,000 letters have been reissued to be hand-delivered to motorists who failed to respond to notification about the State’s intention to quash their convictions and penalty points wrongly imposed through Garda error.

One case has been dealt with so far by the courts where the affected motorist engaged a solicitor to act on their behalf. The court awarded costs “to the value of legal aid”.

It has also emerged that some of the incorrect court convictions were imposed at least nine years ago.

Minister for Justice Charlie Flanagan said 3,888 drivers failed to respond to the letters notifying them about the action to be taken to overturn the wrongly imposed sanction.

The Garda authorities informed him that, by July 19th, a total of 9,380 letters had been sent by registered post to motorists affected by the controversy.

However “it has been necessary to print these letters for a second time for hand delivery in order to ensure receipt and this has occurred in 3,888 cases so far”, Mr Flanagan said.

Sinn Féin justice spokesman Jonathan O’Brien, who raised the issue in a written parliamentary question, said it was “astonishing” only one case appeared to have been through the courts.

He said “the whole thing has been a mess from day one. And as far as I can see they haven’t even identified them all.” It was already five months since the issue first became public “and it could take another year”. Mr O’Brien said he did not believe the authorities would be able to sort every case.

The Sinn Féin justice spokesman added that “it shows up the gardaí’s lack of IT that they are unable to track these motorists”. He said it was ironic it was a private company that sent out these fixed-penalty notices and that company should have a list of all the drivers.

Mr Flanagan said “in some cases, the proceedings in question predate the Criminal Justice Interoperability Project (CJIP) with the checking process therefore being undertaken manually”.

The CJIP was established in 2008 between gardaí and the courts to allow the exchange of summonses and results of cases before the District Court.

The controversy about illegally imposed penalty points became public in March this year but first came to light in April last year when a motorist summonsed to appear before the court for not having a national car test (NCT) certificate had already received and paid a fixed-penalty charge.

A total of 146,865 cases were identified for offences including driving while on a mobile phone, speeding and non-display of a tax disc. Of that number, 14,700 were convicted and had penalty points imposed.

The majority of mistakes occurred where a fixed-penalty notice was not issued and motorists were summonsed without proper procedures being followed by gardaí. The cases are required to be returned to court to have the convictions and sanctions set aside.

The Minister said he expected to receive An Garda Síochána’s final report on the issue shortly.