Estimate of 50,000 Irish living illegally in US ‘pure invention’

Migration institute in US says number of undocumented Irish is fewer than 16,000 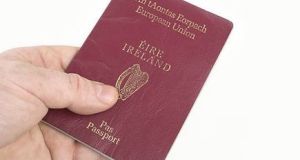 Figure of 50,00 has been stated by the Government and Irish-American immigration campaigners “without a shred of evidence to support it”

The original estimate of 50,000 “undocumented” Irish living in the United States, long cited by the Government, was “pure invention”, an academic specialising in emigration has said.

Dr Piaras Mac Éinrí said the figure had been stated by the Government and Irish-American immigration campaigners “without a shred of evidence to support it”.

He was speaking to The Irish Times after the Government’s new envoy to the US Congress, John Deasy, the Fine Gael TD for Waterford, said that a more accurate figure for the number of Irish living illegally in the US was closer to 10,000, citing research by a respected demographer and the Pew Research Centre.

The Cork-based academic said that Mr Deasy “has it about right”.

“It’s a classic example of the dictum that if you think of a nice round number, big enough to sound serious, and repeat it often enough, it will acquire the status of holy write, especially when repeated uncritically by politicians,” said Dr Mac Éinrí.

“There is a residual issue with 1990s-era undocumented and some later cases and I would in no way minimise their cases. But it’s nothing like the 50,000 number. Most people were regularised or returned to Ireland in the good days, and post-9/11 undocumented migration is way down.”

Dr Mac Éinrí is a lecturer in migration studies at University College Cork, and was part of the the team that conducted the EMIGRE project in 2012-13, the first representative national survey of emigration in Ireland. He has worked for the Department of Foreign Affairs overseas.

The Migration Policy Institute, a Washington-based independent research organisation, has said that the number of undocumented Irish is fewer than 16,000 based on its view that the unauthorised Irish population is not among the top 50 countries, and South Africa is in 50th position with a population of 16,000 illegal immigrants in the United States.

Former taoiseach Enda Kenny and various Ministers have long-referred to the figure of 50,000, the oft-cited figure provided by campaigners for undocumented Irish immigrants.

New York-based publisher and journalist Niall O’Dowd, a co-founder of the Irish Lobby for Immigration Reform, has said that Mr Deasy’s figure is incorrect because it fails to take into account the number of Irish immigrants who overstay their visas.