‘Liveable wage’ of at least €13/hour should be introduced– Halligan 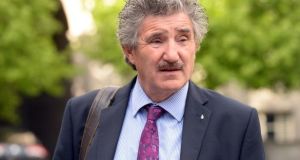 John Halligan accepts some small businesses would suffer if they have to pay €13 per hour. Photograph: Cyril Byrne

Plans to increase the minimum wage by 30 cent an hour do not go far enough, Minister of State in the Department of Enterprise John Halligan has said.

The Independent Alliance TD called for a “liveable wage” of at least €13 per hour to be introduced. He said this would bring more people into the tax net which in turn would benefit the wider economy.

The Low Pay Commission earlier this month recommended the 30 cent increase, the equivalent of 3.2 per cent, in a report to the Government. This would bring the minimum wage to €9.55 per hour and benefit some 120,000 workers, a large number of whom are in the retail and hospitality sectors. The proposed increase would not come into effect until next January.

Taoiseach Leo Varadkar has said the proposals would be worth €12 a week to those working a 40 hour week and that “modest” rises such as this were sustainable.

However, the employers’ lobby Ibec said there was no justification for increasing the minimum wage in the current economic climate.

On Monday, Mr Halligan told Newstalk Breakfast that he accepted some small businesses would suffer if they have to pay €13 per hour, but this could be countered with grants and allowances for PRSI and tax cuts.

He said Enterprise Ireland could play a major role as they knew the small businesses around the country.

“I believe that with the right tack, this makes economic sense. It is financially prudent and could bring improvement to the lives of everyone,” he said.

Mr Halligan said that the Independent Alliance would be pushing the idea if the living wage.

“The time has come for this to be introduced.”