Miriam Lord: Some Greens keen to asterisk Deputy R*** out of the picture

Whatever happens now with Eamon Ryan’s leadership, there won’t be any statue of him 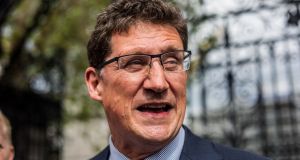 Let us park for a moment the sudden resignation of the leader of the Greens, his shock defection to the Rural Independents Group and his decision to embrace the controversial #MeThane movement.

Showing his true colours, if truth be told.

“Morally reprehensible,” is how one of his party colleagues, a county councillor in North Dublin, described Ryan’s decision to say the N-word in full when reading a searing newspaper description of a child’s experience of racism in Dublin into the Dáil record.

It is rotten luck for the party that so many members were forced to take to social media to communicate their anger and distress at his performance just when a leadership challenge is in full swing. Obviously it wasn’t about taking sides or anything like that.

For if justice is to be done, Eamon must now be asterisked out of the picture.

Although you wouldn’t have gleaned this from the Dáil chamber on Thursday afternoon in the less-than-tension-filled moments after he said “n*****”, his eyes closed, voice strained, grimacing at having to utter it. This vile, demeaning word was hurled at a six-year-old by another child when they were out playing.

“How did this word shoot off the end of the whip and bounce on the breath of a mob to find itself centuries later in the mouth of a child, on a playground in Dublin?” Séan Gallen wrote powerfully in Wednesday’s Irish Times.

And, later still, in the mouth of a political leader on the floor of parliament in Dublin?

Freeze the frame and look at the few figures in the chamber in the immediate aftermath. They sit calmly in their seats, consulting notes, checking their phones. There was no big, instant reaction. The speech they had just heard from the leader of the Greens was a passionate rejection of racism and a thoughtful consideration of what steps might be taken here to combat its pernicious presence.

When they heard that word – it instantly assaults the senses – they heard it placed in careful context by the speaker. He would have been better off not saying it, though. It was a clumsy and naive thing to do.

A senior Fianna Fáil figure, no stranger to internal party skulduggery, wasn’t buying into the outrage.

“Eamon is not a racist. He’s just accident prone.”

Which isn’t a good look for a man who may be tánaiste, or at the very least, a government minister soon. Great, so you’re not a racist now, Eamon. Instead they think you’re Mr Bean.

Back in the Dáil, the Taoiseach didn’t rise up in indignation at what was said by Ryan. Instead he responded in the same interested and engaged manner as his Green Party counterpart.

He told of his Zoom conversation on Wednesday “with Irish people who are black and of colour”. It lasted for more than an hour and as “a forum to hear from them and share our collective experience of racism in Ireland”, it had been a very good “engagement”.

But there was one part of the Taoiseach’s reply that unintentionally spoke to the people who would be hammering away later at Ryan’s reputation.

“An interesting point from the conversation was that much of the education now around racism tells people what not to say and how a word or name should not be used, but many people feel this to be disabling,” said Varadkar. “They don’t know what they should say. How do we talk about the elephant in the room, which may be race? That is part of what we must do.”

Deputy R*** was scarcely out of the Dáil chamber before he was drafting a very sincere mea culpa for Twitter. It included the lines: “I repeated a racial slur, and I was completely wrong to do so. I want to apologise for any hurt caused. I know this particular word should never be used.”

And still that wasn’t enough. Their leader, for some in the party, now appeared to be up there on their list of TDs they despise along with Noel Grealish, Michael Lowry, Mattie McGrath and Danny Healy-Rae.

Sure the only thing worse that Eamon could do now was abandon the party and throw in his lot with the Rural Independents. #MeThaneMatters.

It was a source of wonder around Leinster House, how the never-ending saga of government formation and the fate of the Green Party could suddenly be tangled up in a racism row. As one observer remarked, “Imagine if somebody said to you two months ago that Eamon Ryan’s leadership might be finished off by people in the Greens accusing him of being racist just as they were about to enter government.”

Whatever else happens, it looks like there won’t be any statue of him for posterity. Indeed, he would want to mind himself. Some of his party members sounded on Thursday like they might just try to topple him into Dún Laoghaire harbour.

They had better go into government. Another election now might not be the best idea.

What a time it is to be Green, even if it’s not easy, being green.