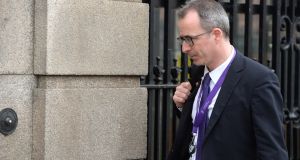 Department of Health’s Jim Breslin: “There were no other beds on the island that we could get access to . . . If there were cheaper beds out there, we could have got them, but there weren’t.” Photograph: Dara Mac Donaill

That old joke about the farmer’s response to a tourist looking for directions came to mind when the Department of Health’s head honcho appeared at Tuesday’s meeting of the Covid Committee.

Members wanted to hear all the details surrounding the “arrangement” between Jim Breslin’s department and the private hospitals which saw the temporary abandonment of our two-tier medical system as private beds were brought into the public hospital sector. But Breslin wasn’t laughing.

With hindsight, he accepted there are aspects of the deal which his department might revisit when – nobody at the meeting was suggesting there might be an “if” – the second surge of the virus hits. But it’s easy after the event to take a more informed approach the next time and easier for politicians who weren’t confronted by the urgent necessity to secure critical hospital beds at short notice to ask searching questions about how this was achieved.

There was a general view that the reason these private beds weren’t needed in the end was down to good luck, he said. They had been acquired “if Covid-19 took us to the place none of us wanted to go”. That journey didn’t happen, despite the woefully inadequate number of intensive care beds in the public system before anybody even knew of the existence of coronavirus.

“But we are all a bit Irish, because we got through this and we look back and say ‘Oh, we must have been lucky’. We weren’t lucky with the amount of capacity we have. We knew on ICU that we had less than the international norms. We knew in other things that we were short, but yet we got through it and I think it’s worth asking the question: how come we have managed?”

The secretary general pointed to the quality of staff here, the performance of people at the front line and the commitment from people in the health service. “I might even mention the department, I might mention the Oireachtas. We did manage to do something right.” He needed to get that off his chest.

But we have entered strange territory when the man in charge of the Department of Health relies on the hospital beds shambles it presided over before the pandemic stuck to demonstrate just how well it responded to this particular crisis.

All the witnesses appeared via video-link. But it was uneventful. All were wearing their full complement of clothes and there wasn’t as much as a bare ankle or hairy knee on show.

The appearance of MEP Ming the Trouserless at a different committee meeting on Tuesday was far more entertaining. He made Roscommon the newest European fleshpot when contributing remotely to a meeting while unaware that the camera shot showed him sitting in his underwear. There’s an idea to liven things up in Leinster House, where video-links are now a thing.

The two Sinn Féin TDs, David Cullinane and Louise O’Reilly, took the toughest line of the committee members present in the chamber. They were very concerned about the high cost of covering all the private beds in the country for the three-month emergency. Cullinane was like a terrier, snapping at the civil servant, hurrying him along, interrupting replies.

The Waterford TD said less than half of the private beds were used. How much capacity did they think they needed? At the start, looking at what was happening in countries like Italy, “we considered we would probably need it all, and more besides”. So they negotiated a deal on the basis they would be using the full capacity in private hospitals?

“There were no other beds on the island that we could get access to . . . If there were cheaper beds out there, we could have got them, but there weren’t,” said Breslin.

The Sinn Féin deputy then drew on his own expertise in the private sector. It seems he was once a used-car salesman.

“I worked in the car sales industry at one point and I can tell you I would love to see people like you coming through the door if I was selling a used car.” Having heard the details, a cost of €300 million didn’t strike him as a good outcome, given there was no cost/benefit analysis and less than half of the beds were used.

Those four fire engines zig-zagged in and out of the exchanges for the rest of the session.

“We were delighted that four fire engines were sent to deal with the crisis rather than three,” said Labour’s Duncan Smith. Róisín Shortall of the Social Democrat’s agreed with his comments. Fine Gael’s Colm Brophy thought some questions sounded like a case of “classic Monday morning quarterbacking”, a term used to describe people who criticise and offer alternative solutions after the event.

As for the fire engines? “They were well-needed and well-wanted. I wouldn’t send any of them away early, that risk should never be taken.”

Waterford Independent Matt Shanahan had a different take. He agreed it was right to dispatch four fire tenders “but I would also say that pretty soon we discovered that two fire tenders had the fire under control. We could have sent those other tenders off to treat fires elsewhere.”

Sinn Féin’s Louise O’Reilly had the last word: “If we wanted a complete picture of that we could say that the conditions were created in advance for the fire to get out of control.”