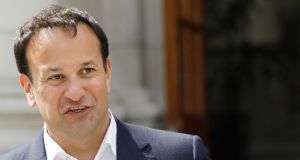 Taoiseach Leo Varadkar: There is “a real absence of moral leadership from the top in the United States”. Photograph: Leon Farrell/Photocall Ireland

Days are long in Leinster House with barely a soul about and sluggish sittings blurring into a fog of pre-cooked statements, speeches masquerading as questions and strictly policed micro-replies.

And all wrapped up in a Corona-coated shell.

It’s all talk. Variations on a theme by Pandemic. There is no legislation. No government. Normal business is suspended. They have two-hour bursts of babble and then their time-activated Minister escapes. Spurned Ministers are trapped in the interregnum, forced to carry on as before even though they have lost their seats.

Take former TD Shane Ross, ministerial seat-warmer in the Department of Transport, Tourism and Sport. He was on duty on Wednesday night for a discussion on Covid-19 related issues in the aviation sector. Kerry’s Michael Healy-Rae, in a wide-ranging contribution, ended with a heartfelt plea for sports capital grants to continue into the future.

Nothing to do with aviation, unless you take into account the danger of deputies crashing and burning if they can’t claim credit for securing sports grants for local clubs.

“Sports capital grants? Deputy, I won’t be here for them,” laughed the Minister formerly known as Winston Churchtown. “I won’t be able to do anything for you. But I will make a strong recommendation. I’ll leave a note on my desk for my successor saying ‘contact Deputy Healy Rae when it comes to sports capital grants, he’s the man who knows how to manage them’.”

“The absence of a proper government is really trying patience now, although it’s amazing how long a country can continue ticking over without one.”

In the chamber on Thursday morning, the all-enveloping curtain of Covid was temporarily pulled aside by TDs anxious to comment on the killing of George Floyd in Minneapolis and express their support for the Black Lives Matter movement. The Taoiseach spoke of the “poison of racism” which is also “a virus, transmitted at an early age, perpetuated by prejudice, sustained by systems, often unrecognised by those whom it infects, possible to counteract and correct for, but never easy to cure”.

Without referring to the American president by name, Leo Varadkar spoke of “a real absence of moral leadership from the top in the United States. We should have had words of unity, comfort and reconciliation, but we didn’t get them and that is absolutely wrong.”

The phrase “absence of moral leadership” was used twice by the Taoiseach, the second time in response to a challenge from Richard Boyd Barrett to back up his words abhorring racial discrimination by condemning the actions of Donald Trump and, more closer to home, ending the system of direct provision for asylum seekers.

A number of speakers brought up the sub-standard living conditions and work restrictions placed on people in direct provision. It is “not compulsory and it is not a form of detention”, said the Taoiseach, rejecting comparisons between the situation of people trapped in that system here and the treatment of black people in America.

“We need to understand the difference between direct provision and a man who was killed by the police by having somebody step on his neck” was his tin-eared and rather jarring response to Labour leader Alan Kelly on the issue.

The Taoiseach’s attention was also drawn to the plight of the former Debenhams workers, who were outside the Kildare Street gates yet again, standing in socially distanced lines in the clammy drizzle with their protest placards. Some 2,000 Irish staff, mostly women, were let go by the company which, it was claimed in the Dáil, used the cover of the Covid crisis emergency laws to dump its staff in Ireland without having to pay them proper redundancy.

This is now a matter for the courts, he said.

It doesn’t look like those badly treated workers will get much comfort from the Government, now or in the near future.

The highlight of Thursday was the Taoiseach’s weekly bulletin on Covid. This week it was particularly exciting as his latest update on the real update he will be delivering outside the Dáil chamber to his television audience on Friday revealed that he will be announcing an easing of restrictions.

But full details were withheld, because he was only addressing TDs in the Dáil and that’s not really relevant and it certainly isn’t showbiz.

He did say, though, offering a crumb of comfort, that while it may be still “far too soon” for anyone to go wild and book their holidays, “summer is not yet lost”.

And it is not yet lost for those Independent deputies who might reap a handsome dividend from throwing their support behind a new government. The three party leaders who may or may not coalesce in this government met some prospect ballast in the afternoon. What a privilege it must have been for the members of the Regional Independent Group to have a sit-down for an hour or so with Varadkar, Micheál Martin and Eamon Ryan.

They are not to be confused with the members of the Rural Independent Group, led by Mattie McGrath and the Healy-Raes, who have yet to meet the Tremendous Three and are therefore already highly insulted before the event.

And they are not to be confused with the Independent Independents Group, which includes Catherine Connolly and Michael Fitzmaurice and others.

We bumped into seven Regionals as they returned through the Merrion Street gates after their meeting. all looking in very high spirits. Their group number eight members – Galway’s Seán Canney joined the meeting remotely. There is also a ninth member, but he is a subsection all on his own. Peadar Tóibín is the sole TD from the party Aontú.

The smiling Regionals were former ministers (different eras) Denis Naughten (recent) and Michael Lowry (donkeys’ years ago), Peter Fitzpatrick, Matt Shanahan, Cathal Berry, Noel Grealish and Verona Murphy. They wouldn’t say what they were offered but confirmed they would be returning for another meeting.

They had “a constructive engagement”.

Hurry up and construct something so.