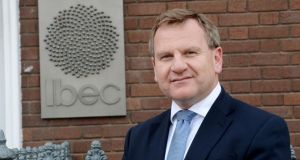 Champagne corks popped in corporate corners, fat cats punched the air with pin-striped paws and, in spacious homes with private bars, silver-haired golfing buddies turned towards the TV, raised their glasses and burst into song.

Despite the ongoing closure of their clubhouses, the Captains of Industry were in high spirits because while they know they really run the country and pull the strings, now everyone else could see that too. They are the ones in full control.

No need to pretend anymore.

It was early Tuesday afternoon when it happened. Nobody seemed to notice. Perhaps because it appeared so natural.

In the Dáil chamber, in the Taoiseach’s seat, sat a man in a well-cut suit looking very much like he belonged there. Doing the usual, answering questions from TDs. But his name was not Leo Varadkar.

Sure lookit, if you weren’t looking at him you’d only be looking at that Tom Parlon

It was Danny McCoy, the chief executive of the Irish Business and Employers Confederation (Ibec).

Not so much a takeover as an assertion of the ruling order. (Just in case any of those Greens with their social consciences and “ferment yer own programmes for government” mentality were getting ideas above their station in the excitement of the coalition formation talks.)

So there he was. The man from Ibec. Sitting in the seat of ultimate political power in Dáil Éireann. Needless to say there wasn’t a complaint from the Fine Gael benches around him. Nor, for that matter from the Fianna Fáil ranks across the floor.

Sure lookit, if you weren’t looking at him you’d only be looking at that Tom Parlon from the Construction Industry Federation.

Those images on the TV monitor in Leinster House could have spooked some of the new Green TDs and Senators contemplating the political future had they looked up and seen Danny McCoy in full flow in the Dáil at this critical juncture in the government formation talks.

But wait. No need for alarm.

He was gone again in a couple of hours. His industry prefers to operate in less conspicuous parts of Leinster House and Government Buildings.

Apparently, Cork socialist Mick Barry fainted in the corridor when he glimpsed the Ibec chief holding forth from the Taoiseach’s chair, while Richard Boyd Barrett was conveyed senseless from the chamber by a team of ushers.

But the sight was a thrilling one for our high net worth visionaries.

“The last time I felt this happy I was listening to an interview with Pat McDonagh from Supermac’s,” boomed one.

Apart from that, the other highlight of a long day in the chamber was from virologist Dr Cillian De Gascun, who magnificently bamboozled the TDs on the origins of Covid-19 and its link to bats.

“SARS-CoV-2 is the seventh coronavirus known to infect humans and is a member of the sarbecovirus subgenus of the coronaviridae family,” he told the politicians. “Although bats are regarded as the most likely natural host for the virus, the recombinogenic nature of coronaviruses means it can be difficult to identify the ultimate source because different parts of the genome can have different origins. This is in contrast to influenza viruses, for example, which reassert but do not typically undergo homologous recombination within ribonucleic acid – RNA – segments.”

Anyway, it seems that bats are riddled with viruses. The Rhinolophus affinis bat is in the frame for our current pandemic, although we must not forget Malayan pangolins.

And, on the subject of bats, there were some very strange reports trickling from the top secret talks between the Greens and Fine Gael and Fianna Fáil. Specific items were down for discussion, but Green negotiator Ossian Smyth wanted to discuss medicinal cannabis and have a commitment in the programme for government that GPs will be able to dispense it to patients.

With the clock running out on the time left to form an administration, one hour of the two-hour morning session was sidetracked with this unscheduled discussion on cannabis.

“I felt like rolling a spliff myself after the first half hour,” one of the negotiators told a political colleague afterwards.

There were mixed signals coming from Agriculture House, which is the building on the Leinster House campus in Kildare Street where the talks are taking place.

Talk of two factions now: the Eamon Ryan faction and the Catherine Martin faction. Martin is challenging Ryan for the leadership, an action which activists correctly insist is in accordance with their constitutional rules. But it isn’t mandatory either.

It seems a strange time to launch a leadership tilt when so much is at stake.

But nothing much is escaping the talks in terms of leakage. The participants are being very cagey. But there is no sense that this is anywhere near being a done deal. Tuesday’s sessions were being touted as the make-or-break ones. But, yet again, the negotiations drag on.

Apart from one session on education, the Dáil has cleared the Wednesday schedule for statements on climate change. All day, starting at 9.30 in the morning and finishing at nine at night. It’ll be scintillating.

Around Leinster House, the mood keeps swinging from pessimistic to mildly optimistic and back again.

Three relatives dead after apparent murder-suicide in Kanturk, Co Cork 16:04
Covid crisis: Five dead in North and 727 new infections 15:24
Number in hospital with Covid-19 at highest point since May 13:41
Almost 20% of staff at Dublin hospital have antibody evidence of Covid-19 infection 13:23
Family proud of Irish volunteer ancestor who died on hunger strike in 1920 10:33