Miriam Lord: Greens in or out? That’s the only question in Leinster House 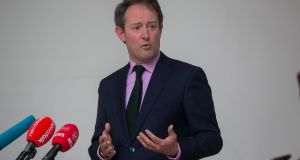 Labour’s Seán Sherlock couldn’t wait to hear what Green leader Eamon Ryan had to say as ‘a prospective tánaiste giving us a sense of his vision’. Photograph: Gareth Chaney/Collins

Is it that time of the year again?

How quickly the months pass. It seems like only yesterday when the last Fluff ’n’ Puff jamboree was held in the Dáil. Those TDs, they really love their annual Climate Change Big Day Out.

The event is so significant it is enshrined in law. Under the Climate Action and Low Carbon Development Act 2015, the relevant minister must present an “annual transition statement” to both houses of the Oireachtas, including an overview of what the government is doing to combat climate change while outlining future plans for curbing dangerous emissions.

This is the fourth one. It was published in December and brought for discussion on Wednesday by Richard Bruton.

The entire report is only fluff and puff. I want less fluffy policy statements and want specific reports

“It is an honour to have the opportunity to make a transition statement at this time,” he said, in what might have been a nod in the direction of his party’s protracted ongoing government formation talks with the Greens. But he was giddily referring to next week’s “first anniversary of the publication of Ireland’s first ever whole-of-government climate action plan”.

There isn’t a scrap of bunting left in the country.

Fianna Fáil’s Seán Fleming welcomed the debate but he didn’t think the Minister’s contribution was much good as there was nothing about implementation.

“The entire report is only fluff and puff,” he concluded. “I want less fluffy policy statements and want specific reports on the issues in the future.”

He was followed by John Lahart. “Like my colleague, I want to huff and puff also, but I will take the opportunity to advocate for the cycling argument,” fluffed the TD for Dublin South West, forgetting Seán had been huffing about the Minister’s puffing and making no such pronouncement on his own sterling efforts.

Sinn Féin’s David Cullinane was also unimpressed. “I agree,” he declared, waving the report in the air. “This is 70 pages of fluff. There isn’t much in it.”

However, having listened to the strong points made by Fleming about the need for specifics, he was sure next year’s report will see “no more huff and puff and that Fianna Fáil are going to blow the house down and usher in a new level of transparency”.

Only in the event of them forming a government with Fine Gael and the Greens, he added. But will the Greens go in or stay out? That is the question, the only question, in Leinster House these days.

During the debate, TDs from parties involved in the talks went nowhere near the subject. Everyone else was fascinated.

Eamon Ryan came into the chamber for the second session of statements on the annual statement, but gave nothing away. This time, as Richard Bruton had done his two hour Covid-restricted stint, Michael Creed, the Minister for Agriculture, was pressed into action.

Meanwhile, Eamon Ryan was annoyed with people putting it about that the Green Party in government would be a bad thing for farmers.

He found an ally in Bríd Smith. The People Before Profit TD rounded on “people who claim to be the defenders of rural Ireland and loudly attack the Greens for trying to destroy rural Ireland”. These individuals talk about the party’s proposals on farming like they are “the greatest threat since the Famine or since Cromwell.”

In the fight to reverse climate change “farmers are critical. They’re the heroes, they’re going to be the key,” said Ryan, quoting a German politician he admires. “And he’s right.”

Labour’s Seán Sherlock couldn’t wait to hear what the Green leader had to say as “a prospective tánaiste giving us a sense of his vision”. Eamon Ryan looked up at him, but, unusually, he didn’t crack a smile. And his expression didn’t change either when Sherlock added that Michael Creed, “potentially the continuing or next minister for agriculture, is also here to listen to that view”.

Fianna Fáil’s man at the farm gate, Charlie McConalogue, must have been raging he didn’t get a mention.

So what were Creed’s thoughts on the “disparity between the Government’s 3.5 per cent target for reducing emissions and the 7 per cent or 6.5 per cent target that is being bandied about as part of the discussions of the programme for government?”

Sherlock had asked Richard Bruton the same question earlier, getting back a convoluted but carefully non-committal reply. He fared no better with Creed. What about Eamon Ryan? Any thoughts on the Greens holding out for those increased targets?

Bríd Smith was concerned that Ryan’s party’s negotiating team may be green by nature as well as by name.

Paul Murphy of Rise beseeched the Greens to think again. There is still time to escape the evil clutches of Leo Varadkar and Micheál Martin, who are trying to lure them down the path to eco-neoliberal perdition, egged on by the scheming right-wing media.

“There is an alternative, which is to join with the eco-socialist left.”

Otherwise, the party will end up as nothing more than a “green mudguard” for the two big parties, and that way spells disaster.

In the chamber, methane hung heavily in the air for the entire day, even though all the doors were thrown open.

Independent TD Michael Fitzmaurice had some fascinating thoughts on wind and how seaweed can stop cows farting too much.

“The report on methane in regard to suckler cows shows that using seaweed products has brought that down by 79 per cent. These are the angles we should be looking at, not kicking farmers and saying we should be culling half or three-quarters of the national herd.”

Limerick’s Richard O’Donoghue, one of the new recruits to the Rural Independents, said people on the ground in rural Ireland feel they are not being listened to.

“We are the best country in the world for protecting and respecting other people’s cultures, except when it comes to our own and especially when it comes to the farming sector,” he said, establishing his membership credentials of the group.

He said reducing the number of Friesian bull calves being born would help cut the size of the national herd. The technology is there, but it’s expensive.

“Reducing the VAT rate on sexed semen would also help to reduce emissions.”

We haven’t heard that sort of talk since the debates on repealing the Eighth.