Merkel vows to support Ireland in EU talks on Brexit 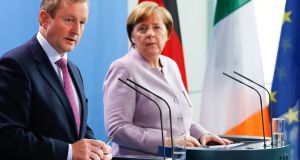 Chancellor Angela Merkel has said Germany will help Ireland “as much as possible” in meeting its specific Brexit concerns in upcoming EU talks with the United Kingdom.

Ahead of talks in Berlin on Thursday with Taoiseach Enda Kenny, Dr Merkel praised Ireland as “always an engaged and important” EU partner and said it was clear Ireland was going to be “particularly affected” by the UK’s departure.

Dublin’s Brexit concerns were not just economic, she said, but also about the “fundamental question of peace and war” in Northern Ireland.

“We will help our friends in Ireland as much as possible to represent their interests,” she said in a brief statement, without taking any questions.

Mr Kenny thanked Dr Merkel for her “deep understanding” of Ireland’s concerns, though he did not repeat his call for any final Brexit agreement to guarantee Northern Ireland’s EU membership in the case of a united Ireland, as anchored in the 1998 Belfast Agreement.

The Taoiseach insisted nothing must be allowed endanger the North’s “fragile” peace and stability, and any Brexit outcome should avoid returning to a hard Border with the Republic.

“Whatever is agreed will have to be compatible with European Union law, but we must not get lost in technical detail at this stage and lose sight of the principle objective of maintaining peace and stability,” he said.

A draft European Council negotiating paper issued last week, ahead of a leaders’ meeting on April 29th, made explicit reference to Ireland’s Brexit concerns over the peace process, the Border and the Common Travel Area.

Mr Kenny repeated his post-Brexit mantra, that Ireland remains firmly at the heart of Europe and would continue to work in a “calm, constructive and productive manner” on Brexit, the migration crisis and other challenges facing the EU. “We will be very much part of the EU team for the negotiations ahead,” he said.

The German leader noted Ireland had been through a “challenging time” of late, but that mastering reforms had translated into “terrific” growth rates. “We want to work constructively in these talks [and] know a lot depends on this on all sides,” she said.

Mr Axel Schafer, SPD member of the Bundestag’s European affairs committee, said it was crucial that Europe continued to support Northern Ireland through the “insanity” of Brexit.

Asked if his party would back restating the Belfast Agreement EU provision in any Brexit deal, he said: “Immediately”.

Germany owed its full support to Europe, and to Ireland, given the support it received from both during the unification process of 1990, he said. “We are in a completely different situation through the insanity of Brexit, one that gives Ireland a new historical perspective,” he told The Irish Times. “I only hope it comes to a referendum [on unification] and that Ireland can be united again.”

Since Mr Kenny’s last visit in July, shortly after Britain voted to leave the EU, senior Irish and German officials have met in Dublin and Berlin to exchange positions. Berlin officials warn that looming talks with London will be of an unprecedented, complex nature and analysts here say it remains to be seen how real empathy towards Ireland translates into policy.

“Berlin’s underlying interest is in having a constructive relationship with Britain,” said Christian Odendahl, chief economist and Berlin representative of the Centre for European Reform. “But there is genuine befuddlement at how Britain intends to negotiate all that in the time given the capacity one government has.”